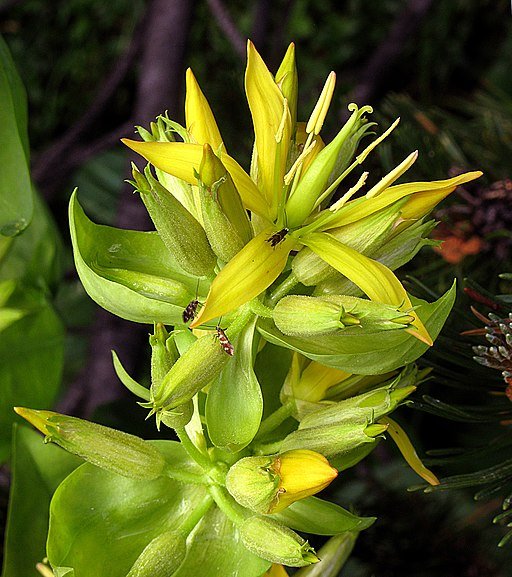 Bitter herbs should be considered any time there is indigestion. At this time of year after all the heavy holiday food and overeating, bitter herbs can be a sincere blessing. This article will give you the general low-down on why bitter herbs can help your digestion.

Rather than overwhelming yourself with all the things you should, or should not do during the holidays, consider solutions to indiscretions during the holidays. Many people eat or drink things that they know they should not, but somehow did not have the will power to avoid. Today, I am providing you with some solutions for dietary indiscretions. These will not substitute for a bad diet, but they can help you if you are traveling and having trouble sticking to your usual diet, or if you feel the need to imbibe in your Grandma's holiday meal, that is not really on your list of foods you eat. Some of us have allergies, or sensitivities that we always adhere to, as the consequences of nonadherence are just too dire, but for others, the more common consequences of overeating or imbibing in a food that we usually avoid are not acutely devastating and not as great a deterrent.  I want to be clear that ignoring even mild food sensitivities can be disastrous over the long-haul, however, infrequent transgressions do happen, and the most common immediate reaction to over-eating or food sensitivities is indigestion.

Supporting Your Body During Holiday Travel and Parties

Most of us know what is and is not good for us to eat, but many of us eat food at holidays that we would never eat otherwise. Most people avoid true allergens and certainly should. However, many people fudge on things that they are sensitive to or they just plain overindulge. If you do this, make sure you use bitter herbs prior to the meal, and carminative herbs during or after the meal.

Gentian is one of the strongest bitters. Milder bitters are Dandelion root/leaves and Artichoke leaves. Chamomile is both a bitter if steeped a long time, and a carminative if the esseinatial oils are retained in the steeping process. Chamomile becomes more bitter if you if you simmer it, but then you loose the carminative action. So, I suggest putting the  Chamomile flowers in a mason jar and pouring hot water over them, put a tight lid on quickly, and wrap it in a towel to keep the heat in. Let it steep for at least 40 minutes and use. Bitters are taken before meals to stimulate digestion. However, if you forget, it still helps to take them while eating.

Carminatives are best taken during, or after meals to help alleviate gas and the accompanying pain. Some of the more common carminatives found in your kitchen would be Fennel, Peppermint or Chamomile.

What You Need To Know About Bitters

In the late winter or early spring, it is traditional in many parts of the world to use stimulating bitters as a spring tonic. This has fallen out of tradition in many cultures and it is too bad as it is very healthy. What exactly are bitters and why do people eat them?

The word “bitters” is used to describe herbs that are bitter to the taste.  We all know what a bitter food tastes like. Besides indicating the taste of the herb, the word "bitters" also indicate a group of herbs, or foods that are stimulating and supportive to the gastrointestinal tract.

Bitters Are Good For Your Digestion

This category of herbs are useful as more than a simple spring tonic. Bitters are a key player in digestive health. Bitters have a supportive effect upon the digestion; they increase the tone of the gastric mucosa and enhance the digestive organ’s blood supply, which facilitates overall digestion.  Bitter plant constituents start their work by locally stimulating the bitter sensory response of taste buds in the mouth and throat.  Bitters also increase digestive secretions from the stomach, pancreas, liver and gallbladder. This leads to better digestive health.

When Bitters Are Used

Bitters are indicated for sluggish or improper digestion when there are indications of poor digestive activity or enzymatic activity. This would include undigested food in the stool, gastrointestinal pain not due to more serious conditions, spasms, belching, and gas. Bitters are commonly used to stimulate appetite,  to relieve constipation, gas, heartburn, and nausea. They are also helpful in gastroparesis, for anorexics, people not producing enough hydrochloric acid (HCL), or people needing their general digestion stimulated. Often the elderly benefit from bitters.

How Bitters Are Used To Prevent Indigestion

The best effects are seen with long-term use of bitters. They are usually ingested before meals in small amounts. This can be in the form of a bitter herb such as Gentian root, Dandelion root or Artichoke leaves taken as a tea or tincture prior to a meal. They can also be eaten as part of a salad as indive leaves, dandelion leaves or any other bitter salad green. Some people take bitter tonics (mixes of various bitter herbs) at meal time.

Bitters tend to be of a cooling nature, and therefore using a heating carminative herb is indicated if a person tends to be cold usually. If the person with indigestion needs a bitter, but tends to have cold hands and feet, or is always cool when others are warm, consider adding a warming carminative to the mix such as Ginger or Cinnamon. Mixing a bitter with a carminative is also indicated if the person has gas as a troubling symptom. Carminatives are very helpful at alleviating gas and the accompanying pain caused by it.

When To Take: Best to take before meals - imediately prior - 15 minutes prior to eating is best.

Forms To Use: Tincture is easy and you don't need much. Teas work well, but since you only need 1/4 cup, it is best to make a cup or two up and save it in ther refrigerator to use over a couple days. Elixers are nice for folks who dislike the bitter taste as they also have honey, or other sweetener in the elixir that tones the bitterness down, and for some people it is the only way they will take it other than a capsule. Capsules are my least favorite way for people to take them, as it bypasses the bitter receptors in the mouth.

How Much To Take: Bitters can be helpful in small amounts. 3-30 drops of tincture/elixir, or some bitter Dandelion leaves added to a salad. It does not take much to be helpful. 1/4 cup of tea is usually enough tea if it is adequate strength. If it is super mild, drink a little more.

Lists of Bitter Herbs: You will find a list of both mild and strong bitter herbs here.

More On The  Taste Bitters

Biter tastes repulse some people, and indeed this may be a protective reaction as there are many bitter toxins that we should not eat.  However , there are important and healthy bitter foods and herbs that can be beneficial when added to the diet.

Bitter activity starts in the mouth. The bitters initiate saliva production, and increase the digstive enzyme called ptyalin (amylase) in the saliva. It was thought that this bitter receptor activity in the mouth was necessary to get the effect of bitters on the rest of digestion, but many of us herbalists have used bitters in capsule form when people would not take them otherwise and found they still worked. They may work better if tasted in the mouth first. It does seem that way, but this has not been studied.

Bitter taste receptors have also been found in other areas of the body. How weird does that seem? The intestinal tract has been shown to have bitter receptors that stimulate release of hormones such as ghrelin and glucagon-like peptide 1.  However, these bitter receptors have also been found in the respiratory, and genitourinary systems, as well as in brain and immune cells. The understanding of these receptors in other areas of the body is currently very rudimentary, but you can read more about them here.

Animal studies showed that giving a bitter compound (hops-based) to animals resulted in weight and fat mass loss, increased energy expenditure, enhanced glucose tolerance and insulin sensitivity, normalized plasma lipids, and induced broad suppression of inflammatory markers. Human research has also shown that the bitter componants of Hops have the ability to decrease fat and enhance weight loss in people. Research is being undertaken to understand how bitters affect fat cells. I will write more about this in the future.

Bitter substances help stimulate bile production, which is important for the emulsification and absorption of fats and fat-soluble vitamins, A, D, E, and K.

Less ability to taste bitter may be associated with Parkinson's disease and with risk factors for cardiovascular disease.

There is much we need to learn about bitters and the more we learn, the more we can appreciate the historical use of the fresh new green leaves of spring bitters and why they were and are used. Their health effects go way beyond digestion.

You might need more zinc. In one tiny study with type 2 diabetics, bitter taste was significantly associated with serum zinc concentrations. Zinc has also been associated with the sense of smell, and smell is important in the process of tasting food. This is why people plug their nose to eat bad tasting medicine. Also consider having your thyroid function assessed by a practitioner, as subclinical hypothyroidism was shown to be associated with decreased smell and decreased sense of bitter taste also.

For More Information on Bitters

For an in-depth look at bitters, check out the "Digestive System" chapter in my book called "Herbal ABC's - The Foundation of Herbal Medicine".

Want more articles like this delivered monthly to your inbox?

Dr. Sharol’s Herbal Formulas E-Book. Currently available for free if you are a member of Amazon’s kindle unlimited.