EBV May Be A Factor In Hashimoto's, Graves' Disease And Thyroid Cancer

Epstein Barr Virus (EBV) has long been associated with thyroid disease. It has been implicated in everything from Hashimotos to thyroid cancer. As I have read through the research I find there is a continuing correlation between EBV and thyroid disorders. Several systemic autoimmune diseases have been demonstrated to be associated with chronically relapsing EBV infection and inefficient immune control of the virus. The evidence keeps piling up and there does seem to be some very obvious connections that need more attention.

EBV is a large enveloped double stranded DNA virus and one of the 9 types of herpesvirus types in the herpes family. It is called Herpes 4 (herpes viruses are all numbered). It is one of the most common viruses in humans. There are several strains of EBV and individuals can become infected with two or more strains. Most people become infected with EBV at some point in their life. Luckily, it is asymptomatic in many people. 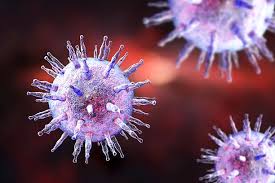 It has a primary infection, a latent or resting period and a reactivation phase. Chronic, relapsing EBV is when an old infection goes back-and-fourth from resting phase to active phase. EBV can infect both epithelial cells and B cells. It has been found in other areas also, but mostly resides in B cells and epithelial cells. Once you have EBV it remains in your body, but mostly in a dormant state. For many people who are infected in the first few years of life, the infection will stay dormant unless the immune system becomes dysfunctional (lowered) and allows it to reactivate. This could be due to old age, drugs, environmental toxins, or other illness that strains the immune system. A person can experience a chronic situation with exacerbations and periods of relief as it goes back-and-forth from latent to active infective states. This kind of relapsing illness is often seen in the family of herpes viruses.

Although younger people are often asymptomatic when they get EBV, older individuals can get symptoms that we call infectious mononucleosis. This is a prolonged state of fever, chills, aches, swollen lymph nodes, sore throat, reddened throat, cough, nausea and vomiting, rash, fatigue, loss of appetite, headache, photophobia, malaise as well as enlarged liver and spleen. This can last 2-4 weeks but in some cases may last for months and need immune support.

I have found a base herbal formula of Echinacea, Osha, Licorice  and Red root is helpful for immune support in Mononucleosis, but not everyone can use Licorice due to side effects. Additionally, other herbs and supplements are often needed for the individual on top of this base formula.

When EBV reactivates after a latent period it is milder than the initial infection. It often looks flu-like, except it lasts a long time and there is no fever. The person usually has one or more of the following: fatigue, lymph node swelling, possible chronic sore throat, muscle and joint pain, may feel depressed, may find abnormal liver tests, abnormal serology for antibodies, or detection and quantification with PCR testing. Due to false negatives and positives, it is suggested by researchers that multiple types of testing be used to identify EBV reactivation. "Thus, to fully define the incidence and prevalence of EBV infection in a population, several assays should be used, preferably combining assays for detection of viral nucleic acids, Abs to different viral antigens and the frequency of virus-specific T cells.Optimally, different detection principles may also be used; e.g. for Ab detection: enzyme-linked immunosorbent assay (ELISA) and immunoblotting, for T cell detection: antigen-induced cytokine release and peptide-MHC tetramer assays, and the assays should target different parts of the viral genome or different viral antigens representing both latent and lytic states."

I would also add that other viruses can cause similar symptoms. A couple of examples would be Cytomegalovirus, and Toxoplasmosis.

Why One Person Gets EBV Reactivation And Another Does Not

The reason one person never has EBV reactivation while other people have reactivations over and over again is due to their level of immune response. The immune system forces the virus back into hibernation when it rears its ugly head. the immune system's ability to react depends on an individual’s genetics, other pathogens, the body's state of nutrition, environmental toxins and any other types of body stressors that may be affecting the immune system. One of the things that really taxes the immune system is stress. Being chronically overwhelmed and exhausted makes it more difficult for our body to contain infection and inflammation.

Epstein Barr Virus As Cause Of Thyroid Disease Through Autoimmunity

One of the implications is that EBV is causing autoimmune disorders in the thyroid gland as well as other autoimmune disorders such as Sjogren’s syndrome, Rheumatoid arthritis, Lupus and multiple sclerosis. The so called “autoimmiune thyroid disorders” are the most common of the organ-specific autoimmune diseases, affecting up to 10% of the world’s population.

Why EBV is Considered A Factor In Autoimmune Disease

Let's look at the theory of EBV autoimmunity and thyroid disease before moving on.

One hypothesis is that in genetically susceptible patients, EBV-infected autoreactive B-cells seed the thyroid gland, produce autoantibodies, and send co-stimulatory signals to autoreactive T-cells. Normally, the EBV infection is kept under control, especially by cytotoxic CD8+ T-cells that eliminate active EBV and infected B-cells that have virus hiding quietly inside them. Impaired EBV control may result from a decreased number of EBV-specific CD8+ T-cells. An increased CD4/CD8 ratio is characteristic of autoimmune diseases

The Theory of Autoimmunity

The idea of autoimmunity is that our bodies are mistakenly attacking themselves for one of a variety of reasons that we will briefly examine. However, could it be that the EBV virus or other viruses may actually be responsible for the changes and damages in the immune system as well as the direct damage caused to organ tissues such as the thyroid, rather than the immune system turning on itself. Perhaps it is not an immune system run amok, but an immune system that is continually having to protect us from EBV or other viruses, and our tissues end up with collateral damage. Is the idea of decreasing the immune system's activity (that is believed to be running amok) setting us up for further long-term damage from the EBV or other viruses? This is a question some physicians are asking. I personally don't know, but I do know that the body does make antibodies to its own tissue in autoimmunity as we can measure them, so it is hard to believe these antibodies are not causing tissue damage. In this article we will take a look at what EBV is and how it is known to affect the thyroid. In a later article, we will examine what can be done about EBV and how we can support the thyroid gland.

Theoretical Mechanisms Thought To Cause Autoimmunity

EBV Is Associated With A Variety Of Diseases

Although most of the research is looking at Hashimotos and EBV, it appears other disorders are also associated with EBV or can be triggered by EBV. Grave’s disease (a hyperthyroid disease) as well as the growth of cancers, which are correlated with EBV. It is not just thyroid cancer that has been implicated, EBV has been associated with other tumors such as gliomas and lymphomas too. Researchers theorize that this may be related to an inherent ability of EBV to cause transformation of B cells and epithelial cells into carcinogenic cells. (EBV is largely found in B cells and epithelial cells) I would add that EBV is also not the only virus connected with cancer as other viruses have also been implicated in cancer.

Is EBV the agent responsible for development of these cancers and "Autoimmune" thyroid diseases or is it a coincidental infection? Evidence of EBV is found in 90-95% of adults, so this is a fair question to ask. Research indicates that 10-15% of human cancers are caused by infection from several types of viruses. These include papillomavirus, hepatitis B virus, human herpes virus 8 and Epstein-Barr virus (EBV) and RNA viruses such as human T-cell lymphotropic virus type 1 and hepatitis C virus.

In the case of EBV, researchers originally thought that when the virus is in a lytic state (active and infective)  that this was when infection related disease such as cancer or "autoimmune" disease took place. In the past researchers thought EBV was not hazardous in a latent (resting) state. However, more recent research claims latent EBV appears to be involved in instigating cancer.

This is certainly not something well understood. Indeed it does appear that EBV is a contributory factor in cancer and "autoimmune" diseases, but it also appears other pathogens, genetics and environmental factors play a role.

Other Pathogens Implicated Through Research As Factors In Causing Thyroid Disease

This list keeps growing as more research is completed. These are are all possible factors in thyroid disease.

Involvement of Genetics and Environmental Factors

Environmental factors are also said to play a role in thyroid autoimmune disease, accounting for 20-40% of cases with regard to monozygous twins, results confirm that genetic factors play an important role in the etiology of Graves' disease. However, they may not be as powerful as previously thought.

The cause of Hashimoto's disease and Grave's disease as well as thyroid cancer is certainly not known for sure, but the research keeps building up that EBV and perhaps even other pathogens have a causative role in their presence.

Identifying reactivation of EBV and other viruses/pathogens is not always easy to do and needs thorough testing to identify.  If you think you have chronic EBV it would be good to find out as it is associated with a lot of possible complications.

Seeking out advice from a naturopath, functional medicine MD or other alternative practitioner to support your immune system would be beneficial if you do have chronic EBV. As I have time, I will write a further article on this to give you some ideas on immune support and protecting your body from EBV.