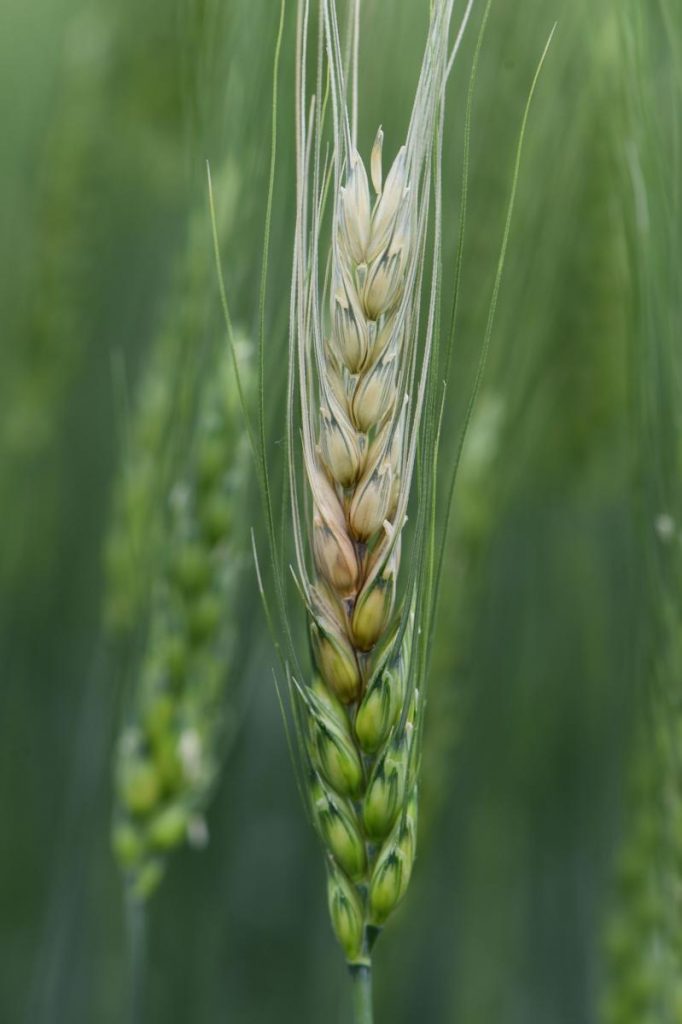 Did you know there is a food mycotoxin that is a potent endocrine disruptor? This means it mimics or interferes with the body's hormones. In this case it mimics estrogen.  This mycotoxin is called zearalenone and in some countries a metabolite of zearalenone under the name of Zeranol (trade name Ralgro®) is sold for use as a steroid hormone to make pigs, sheep and beef cattle grow faster and increase the efficiency of converting feed into meat. This mycotoxin is used to decrease the amount of calories animals need to fatten up. By injecting a pellet of the mycotoxin into the ear of cattle it will decrease their need for calories by 30% and help them fatten up. (consider this toxin probably does the same in humans and is why mold senstitive folks have trouble losing weight). The USA is one country that has approved use of this mycotoxin metabolite as a hormonal stumulant for livestock. The safety of using zeranol as a growth promoter has been debated ever since it was approved by the US Food and Drug Administration.

Both the zearalenone found in food as well as zeranol used as an inplant in animals are able to bind to the active site of human estrogen receptor alpha and beta in the same manner as 17 beta-estradiol. This implicates the mycotoxin and zeranol in estrogen sensitive cancers such as breast cancer. It has also been found that sperm quality of sons of "high beef consumers" is lower than those in males whose mothers ate less beef during pregnancy. There are many additional studies  that implicate zearalenone and zeranol as endocrine disruptors and possible factors in causing cancer.

The estrogenic mycotoxin zearalenone is made by several fungi of the Fusarium genus.

This potent endocrine disruptor may be found in multiple grains and their flours, including corn, wheat, rice, oats, barley, sorghum and rye as malt, soybeans and beer.  In the USA and Canada zearalenone is most frequently found in corn and wheat, while in Europe is often found in  wheat, rye and oats. Dairy, meat and eggs may also contain zearalenone or it’s metabolites. The metabolites may be even more estrogenic than the original zearalenone.

So both the natural mycotoxin zearalenone may end up in meat, dairy and eggs from grains the animals ate as well as its metabolite zeranol which can end up in the meat of animals fattened up with this endocrine disruptor.

Several nations have established guidance levels or maximum permissible levels for ZEN in foods, ranging from 50 to 1000 μg/kg (ppb). The United States does not regulate ZEN. There are guidelines for feeding agricultural animals but no enforceable regulations on allowable limits in food for people or animals.

Suggested Levels In The USA

The USA has given farmers suggestions of levels of ZEN that are okay in grains, and it is up to farmers to have good growing practices and manufacturers to have good manufacturing practices to keep the levels low. However, there is little testing done, and that which is done is not known to the public unless you look for it as I have done. This works great as long as everyone has good intentions, however there are some issues that can arise. For instance, there is no one making sure a corn batch that is tested as high does not end up in your dogs food. Recently, another mycotoxin called aflatoxin was found in pet food. I would suggest you make your own dog food anyway, just as you should be making your own food from scratch.

Corn harvests in the United States in 2018 when there was late-season wet weather showed quite high levels of zearalenone.

Although zearalenone can cause chronic toxicity to some organ systems and has caused inflammation in the digestive tract in animals studies, the main issue found is in it’s activity as an endocrine disruptor. Zearalenone (ZEN) mimics the reproductive hormone estrogen. Zearalenone and its metabolites have been shown to compete effectively with specific binding sites of the estrogen receptors. Zearalenone acts by binding estrogen receptors (ERs), as an agonist to ER-alpha and a mixed agonist/antiagonist activity to ER-beta. The affect of ZEN will depend on the sex of the person or animal and if they are prepubertal, menstruating, pregnant, or menopausal as well as how well they hydroxylate, conjugate and de-conjugate it.

Possible Signs Of Hyperestrogenism From Zearalenone Or It's Metabolites

The mycotoxin metabolite α‐zearanol, one of the phase I mycotoxin metabolites of ZEN, is also a potent endocrine disruptor. It is used as a growth promoter in non‐European Union countries under the name of Zeranol (trade name Ralgro®). It is banned in Europe, but commercially available in many other countries, and used as a growth hormone to increase weight gain in beef cattle due to it's estrogenic effect.

The FDA and USDA are responsible for evaluating the safety of zeranol and regulating its use in agriculture. They imposed regulations to control the amount of zeranol used in livestock rearing and created a maximum average daily intake that is allowable for human consumption. Due to the fact that zearalenone and zeranol can probably promote anabolic effects in humans zeranol is a prohibited anabolic agent and is tested in the Olympics as a doping agent. You may remember in 2017 that Ajee Wilson, the 2006 Olympian tested positive for zeranol and was accused of taking the anabolic agent. After reviewing her food purchases, it was decided that the zeranol was from contaminated American beef that she had eaten. Between 2003 and 2018 there were 6 positive tests globally in athletes.

Zearalenone is largely removed from the body through phase II glucuronidation with sulfation as a secondary method. It is removed in the urine and through the bile. So far clays and zeolites do not look so good at binding zearlenone in animal digestive tract except in a very small amount of research studies. The majority of studies show they are not good binders in vivo. Cholestyramine was shown to be beneficial in a dynamic gastrointestinal model. Due to the cost of cholestyramine it is not usually used in animals and most research is agricultural based. Saccharmocyes cerevisiae is promising. It appears to both bind zearalenone as well as help metabolize it. Most strains of live S. cerevisiae tested will effectively remove most of the ZEN when introduced to yeast broths. They metabolize it into other compounds. The most active strains (S. cerevisiae CS, LL74 and LL83) were able to eliminate more than 90% of ZEN present in the culture media in one day. Research found that wild strains from silage metabolized ZEN in much the same way as commercial strains, intimating that general fermented products might work as well as commercial strains being used. There is of course the concern that the ZEN may be changed into alpha- zearalenol which is more estrogenic than the zearalenone, but it appears beta-zeranelol is the most prevalent metabolite and it has lower estrogenic activity than zearanlenone. The research shows reason to believe that there are other metabolites being created that are not known at this time.

Gut bacteria have been shown to change the conjugated ZEN back into more toxic hydroxylated ZEN. However, this appears to largely be due to unfriendly bacteria. In regard to the glucuronidated ZEN, it may be helpful to support healthy gut bacteria to decrease this alteration. Beta-glucuronidase (breaks down glucuronide conjugates) is inducible by anaerobic E.coli, Peptostreptococcus, Bacteroides and clostridia. Using probiotics and prebiotics to increase the friendly gut bacteria and keep the unfriendly ones in check will help reduce beta-glucuronidase in the gut and keep the ZEN in it's conjugated glucuronide form. Overall lactic acid producing bacteria and a high fiber diet decrease fecal bacterial beta glucuronidases.

We know that starvation, fasting and alcoholism can deplete the glucuronate acid pool necessary for conjugation to the toxin.

Some supplements that have been used to enhance glucuronidation are resveratrol, purple rice bran, licorice, sulforaphane found in the mustard family vegetables. Black pepper and its constituent piperine can decrease glucuronidation. Cayenne has been shown to increase beta glucuronidase (the enzyme that will deconjugate the glucuronide from zearalenone).

Using calcium-D-glucarate as a supplement also inhibits beta glucuronidase and may be helpful.

Calcium D-glucarate is a suppressant of beta-glucuronidase, and for good measure it has shown reductions in breast cancer risk in animal studies.

Calcium D-glucarate inhibits the deconjugation of glucuronides by inhibiting beta-glucuronidase. Some foods are also high in calcium D-glucarate. They include all of the mustard family vegetables such as broccoli, cabbage, Brussels sprouts, as well as apples, grapefruit and oranges.

Oxidative Stress And Use Of Antioxidants

Oxidative damage is thought to be a factor in cell damage and death from ZEN.  Zearalenone has been shown to affect integrity of the DNA and mitochondria, decrease cell proliferation and modulate the inflammatory response. These are usually associated with oxidative stress. Most studies of toxicity have shown that the cytotoxicity of ZEN is determined by the production of ROS, DNA damage, and an increased formation of lipid peroxidation.

ROS  has been implicated in the decrease in mitochondrial membrane potential and increase in DNA damage when exposed to ZEN. Using antioxidants to prevent creation of reactive oxygen species (ROS) and reactive nitrogen species (RNS) has been observed to be helpful against toxic effects from several mycotoxins. Some of these tested that have shown some benefit with ZEN are  vitamin A, E, C and crocin found in saffron and Gardenia jasminoides, as well as  curcumin found in Turmeric, silymarin from Milk thistle, and lycopene have been shown to modulate oxidative stress from mycotoxins. N-aceytyl cysteine and resveratrol have also shown benefit. 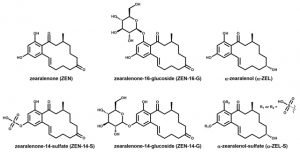