S-Adenosylmethionine (SAM, was listed as SAMe in the past) acts a methyl donor for over 200 (Some research data claims 300) methylation reactions. SAM also serves as a precursor for biosynthesis of polyamines, and is the substrate used for numerous reactions, including vitamin biosynthesis and nucleotide modifications. Therefore SAM is believed to be the second most often used biological compound by the body in normal biochemical reactions. The first is of course ATP. SAM is very important in cellular homeostasis.

SAM Is Queen Of The Methyl Donors

The reason SAM is used so much as a methyl donor rather than 5-methyltetrahydrofolate (5MTHF/active folate) is that the transfer potential for 5MTHF is not very high. The activated methyl carrier of choice is SAM. SAM is produced by the transfer of an adenosyl group from ATP to methionine. The methyl group of the methionine group is activated by the positive charge on the adjacent sulfur atom. This positive charge make the methyl transfer more energetic than from 5-MTHF.

So to reiterate SAM is a molecule composed of adenosine (derived from ATP) and methionine. Methionine is an amino acid that comes from your diet and can be recycled in the body.

When SAM is used to donate a methyl group, SAM is converted to S-adenosylhomocysteine (SAH), an inhibitor of methylation reactions. Hence, the ratio SAM/SAH is termed as the methylation capacity of the cell.

The methionine cycle or methylation pathway not only has to produce SAM, it also has to recycle it.

For example: Once SAM has given up its methyl groups to help create neurotransmitters, it is then “recycled” or in scientific terms, re-methylated. After SAM has received its new methyl groups, it can perform its job all over again. Due to methylation pathway weaknesses in some individuals, some people can neither produce nor recycle SAM very well. Fortunately, we can supplement SAM or better yet support the folate or methionine pathway to bypass mutations and attain its many benefits.

The methionine/methylation cycle is shown below. This gives you an idea of how SAM is made and recycled. It is explained in greater detail on the methylation page. 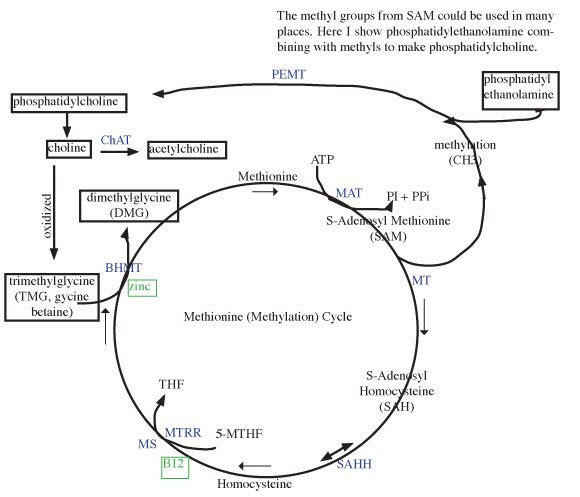 ,Once SAM provides a methyl group, it becomes S-adenosylhomocysteine and then homocysteine. Homocysteine is now ready to be changed back into methionine which will once again be used to synthesize SAM. ( Homocysteine could also go into the transulfuration pathway too, but it is not shown here.)

As a Queen of the methylators, SAM does all the things a methylator does. Without enough of it you see all the diseases associated with poor methylation. So for a good understanding of how important SAM is, just read about methylation here.

Here are a few of the things SAM does.

Some varoius factoids about SAM

SAM can cause insomnia if not taken in the morning, and is best taken on an empty stomach.

S-adenosyl-l-methionine is chemically unstable, both in solution, and in dry state, and forms different degradation products. The chemical instability represents a problem during the preparation of therapeutic formulations. One research study showed the disaccharide trehalose exercises a protective effect towards the lyophilized SAM, decreasing its degradation (65% of SAM was detected after 50 days at 37 °C). A parallel study, performed to stabilize the SAM into lyophilized yeast cells enriched in the sulfonium compound, assessed the positive effect of trehalose also in whole cells, but in lesser measure. It is possible that using trehalose with SAM in the future will protect it and make it more shelf stable.What is currently done is to put it in an acid resistant capsule and the product is kept cool. It can’t be heat treated. SAM needs to be kept refrigerated. Best if it is in blister pack. Good SAM will usuallyl be more expensive than other SAM and this is why.