Blueberries, A Healthy Treat And An Agent to Decrease Obesity 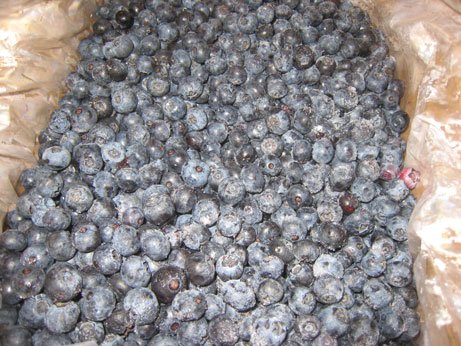 We all know berries taste good, and many of us know they are healthy for us. Scientific research has shown berries support immune function, mental health, reduce obesity, reduce risk of cardiovascular disease, and type II diabetes. I think of berries as being helpful to prevent or reduce on-going inflammation in the body. Therefore they are a source of protection for many of todays chronic diseases that afflict humans.

Tip Alert: These berries on the left are frozen organic blueberries from Sunset Valley Organics. I purchase them through Azure who ships to drop off locations all over the United States. Do you know how hard it is to find ripe, frozen, organic blueberries?

Other Berries Are Also Healthy

Basically all bright colored edible berries will contain anthocyanidins (type of polyphenol) that are associated with anti-inflammatory activity and the health benefits berries are known for. These berrries include but are not limited to blueberries, huckleberries, elderberries, cranberries, currants, strawberries, lingonberries, chokeberries, blackberries, thimbleberries, raspberries and marionberries.

Some of you know how I love to ferment things. It is interesting to note that fermented blueberry juice was recently found to have an anti-adipogenic activity in petri dishes and with mice. In real people talk that means it decreases fat cell creation and may have anti-obesity properties for humans.

Serratia vaccinii is a bacteria found on some blueberry skins. It had been found that fermentation of blueberries with this bacteria found on the skins of the berries, was able to greatly increase the phenolic content and  increase its antioxidant activity.   This same fermented blueberry juice has been used on mice to decrease high blood sugar levels in diabetic mice and to reverse adiponectin levels which the researchers think will have an anti-obesity action. (Adiponectin is a protein made by fat cells that circulates in the bloodstream, acting as a messenger. It plays a role in how the body uses sugar, or glucose, and fat for energy.)

Chlorogenic Acid As An Active Ingredient

I would point out that chlorogenic acid is a major component of green bean coffee extract. It has been reported to reduce blood sugar levels and potentially exert an anti-diabetic effect as well as being implicated in weight loss in humans

The good gut bacteria are supported by the variety of polyphenols in brightly colored fruits, and veggies, and these bacteria tend to keep us healthier as well as maintain our body weight at an optimal level. So, it is likely that similar research will be found on other berries too.