Milk Thistle, An Herb Of Protection 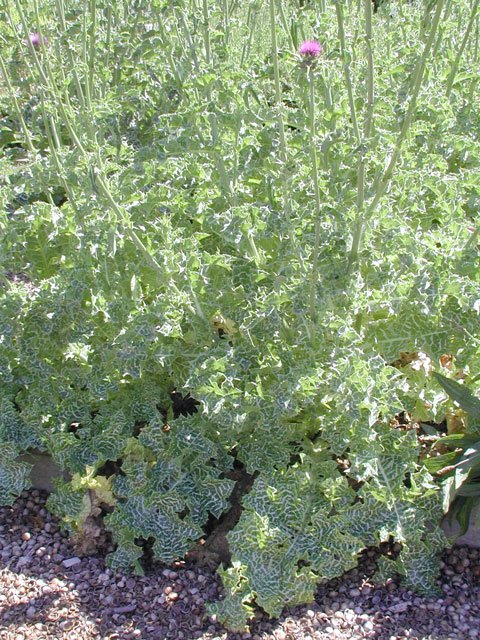 Milk Thistle - For Protection From Pollution And Radiation

Students often ask me if there is one herb that I would recommend to everyone. In the distant past I would tell them, "No,  everyone is different and each person has different herbal needs." However I changed my tune some time ago. We live in an ever increasing polluted world. Our bodies breathe in pollutants from the air, and ingest pollutants from the water and food we eat. Our skin is accousted by pollutants from things we come in contact with including the air.  Some people are around dangerous chemicals because of their job or they simply live in a considerably polluted environment. Our bodies are under increasing pressure to transform and remove these pollutants from our tissues. While we are all striving to change our planetary condition, we should additionally take precautions to assist our body in its attempt to detoxify hazardous chemicals.

Milk thistle is an herb which supports the body’s ability to detoxify and remove pollutants. It does this by maintaining our natural protective processes via enzymatic activities going on in all the cells of the body, especially the liver. A group of active constituents in milk thistle, collectively called silymarin has been shown to assist the liver and other organs in detoxification by acting as an antioxidant. Milk thistle increases the synthesis of glutathione (an enzyme necessary for detoxification), protects the liver from damage and increases the rate of liver tissue regeneration when damage has already occurred. Silymarin is many times more potent in antioxidant activity than vitamin E and vitamin C.  Additionally it has also been shown to be beneficial at protecting the kidneys from damage. In diabetics the constituent group silymarin has been beneficial in lowering blood sugar as well as stabilizing blood sugar levels. It is a wonderful herb to help people who are living in moldy environments and dealing with mycotoxins.

The Seed Is The Part Usually Used

The cheapest form of milk thistle works great for me! The cheapest form is the whole, raw seed. (just make sure it is organic) Although you can purchase expensive extracts of milk thistle, I have found that ingestion of powdered herb works great. However, do not buy milk thistle powder.  Once you powder the herb it becomes rancid quickly due to the high level of fatty acids in the seed. If you purchase the ground powder in a store, it is likely it was powdered long ago and sitting in the heat of the store for many months. Once ground it should go into the freezer to protect it from going rancid. You need to purchase whole seeds and grind them in a coffee grinder yourself to make sure it is fresh. Do not chew them as they are tough and may damage your teeth. Grind them up coarsely and keep only a few days supply on the kitchen counter at a time. Keep the rest of the ground milk thistle in the freezer in a container with a tight fitting lid. Take one teaspoon to one tablespoon each AM and PM as necessary. The smaller amount is taken  if using it preventatively and the larger amount if using it to treat a health condition or if  someone is working in a toxic environment. Take the spoonful and chase it down with a glass of water. Do not inhale while swallowing the powder. 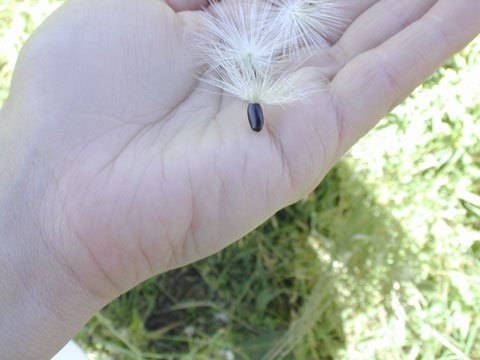 It is used by holistic physicians and herbalists for most liver diseases, including hepatitis, fatty liver, cirrhosis, liver protection and/or regeneration immediately after exposure to liver toxins although it is best used as a protectant before exposure to liver toxins. If you have heard about using milk thistle for Amanita poisoning, please know that it has to be used as an injectable. If you have Amanita poisoning do not think that ingesting it will cure you. Amanita mushrooms destroy your liver in a matter of hours so you need the silymarin injected into your body to get it into you quickly to protect your liver. You don't have time to wait for digestion of the milk thistle seed. In the United States we do not  usually carry it in all the hospitals but some countries do and it is injected immediately. If you are taken to a hospital for Amanita poisoning and they do not have silymarin, you can ask them to contact a local naturopath to see if they carry the injectable silymarin. If so, it could be rushed to the hospital immediately. Now, if I was in the woods and ate the Death Cap, I would certainly eat Milk thistle seed if I had it with me. It would help, especially if I ate a lot of it and nothing else. It would be  matter of getting it digested as quick as possible.

The constituent silymarin shows antifibrotic effects in early and advanced biliary fibrosis secondary to complete bile duct obliteration in rats. In patients with diabetes and alcohol-induced cirrhosis, silymarin has been shown to lower lipoperoxidative damage, blood glucose levels, glycosylated hemoglobin values and exogenous insulin requirements. Silymarin is incorporated in cell membranes and increases the resistance of the membranes against injurious influences, probably by changing the physiochemical properties. It prevents the uptake of the mushroom toxins amanitin and phalloidin by competitive inhibition of receptors at the outer cell membrane and protects the liver against poisoning by organophosphate insecticides. It also stimulates RNA polymerase A, polymerase I, which enhances ribosome protein synthesis and activates the regenerative capacity of the liver cells. Silibinin has been used on lab rats to protect them from glomerular and tubular damage from cisplatin. Milk thistle prevents liver damage from butyrophenones, phenothiazines, acetaminophen, halothane, dilantin and ethanol due to membrane-stabilizing and free radical scavenging effects of silymarin.

Silymarin has been shown to prevent damage to the liver through several mechanisms: by acting as an antioxidant, by increasing the synthesis of glutathione and by increasing the rate of liver tissue regeneration. Silymarin is many times more potent in antioxidant activity than vitamin E and vitamin C. The protective effect of silymarin against liver damage has been demonstrated in numerous experimental studies. Silymarin has been shown to protect the liver from the damage produced by such liver-toxic chemicals as carbon tetrachloride, amanita toxin, galactosamine, and praseodymium nitrate.

One of the key mechanisms by which silymarin enhances detoxification is by preventing the depletion of glutathione. Silymarin not only prevents the depletion of glutathione induced by alcohol and other toxic chemicals, but has been shown to increase the level of glutathione of the liver by up to 35%, even in people with normal health. In human studies, silymarin has been shown to have positive effects in treating liver diseases of various kinds, including cirrhosis, chronic hepatitis, fatty infiltration of the liver, and inflammation of the bile duct.

Silybum also offers kidney protection. It has been shown to protects the kidney from both glomerular damage and tubular damage from cisplatin without compromising cisplatin.

In a group of  type II diabetes with alcohol-induced liver damage silymarin evidenced a significant reduction in fasting blood glucose levels (It took a month to start.) HbA1c also substantially decreased. Throughout the course of treatment, fasting insulin levels declined by almost one-half and daily insulin requirements decreased by about 24%. Liver enzymes (SGOT and SGPT) modulated, reflecting improved liver function. A lack of hypoglycemic episodes suggests silymarin not only lowers blood glucose levels, but also stabilizes them as well.

None that I know of at this time.

Research on Silymarin (the active constituent in milk thistle)

The radioprotective effect of silymarin using different modes of treatment against radiation (3 or 6 Gy) induced hepatotoxicity 1, 3 and 7 days post-irradiation was studied. Whole-body gamma-irradiation revealed an increase in serum alkaline phosphatase (AP) activity as well as liver glutathione reductase (GR) and glutathione peroxidase (GSH-PX) activities on the first post-exposure day with respect to the control value. However, 3 days after radiation exposure, these parameters showed a significant decrease below the control level which persisted till the end of the experimental time except for serum AP activity that showed another increase on the seventh post-exposure day at 3 Gy dose of radiation. A gradual increase in serum alanine and aspartate aminotransferase (ALT&AST) as well as gamma glutamyl transpeptidase activities were observed due to irradiation throughout the experimental time. Administration of silymarin as single (70 mg kg −1), fractionated (490 mg kg −1) oral doses or as intravenous (i.v.) injection (50 mg kg −1), caused significant protection. Intravenous treatment showed the most pronounced protection. The protective effect of silymarin was attributed to its antioxidant and free radicals scavenging properties.

The effect of silymarin and gamma radiation on nucleic acids in rat organs.

The influence of silymarin on radiation-induced changes in concentrations of RNA and DNA was followed in male Wistar rats. The liver, spleen and bone marrow were examined at 30 h, 7, 14 and 21 days after 6 Gy whole-body gamma irradiation or 30 h and 7 days after 3 Gy whole-body gamma irradiation. Following silymarin treatment, a mild increase in the concentration and total content of RNA and DNA in liver and bone marrow at days 7 and 14 after administration was found; in spleen, total content of DNA significantly increased at 30 h. Silymarin administered 1 h before irradiation, moderated radiation-induced changes in nucleic acids in its target organ, liver, and in spleen and bone marrow. We suggest that beneficial effects of silymarin on radiation injury to the membranes of liver cells resulted primarily from its antioxidative ability and its ability to act as a radical scavenger, thereby preventing membrane permeability changes.

Evaluation of silymarin as a promising radioprotector.

Silymarin, a purified extract of seeds of Silybum marianum L. and well known for its hepatoprotective abilities, has been evaluated for inherent utility as a radioprotective agent. A fraction (INM-7035) was authenticated by characterizing the percentage composition of silybin A and B (39.9% and 57.4%). Free radical scavenging activities of INM-7035 against superoxide radicals (>68%), hydroxyl radicals (>33.75%), DPPH (67.2%), and ABTS (32.4%) were also evaluated. The fraction chelated (>30%) ferrous ions, thereby able to restrict amplification. INM-7035 exhibited >50% peroxyl radical scavenging activity in the lipid phase along with dose-dependent (R2 = 0.990) reducing power in the aqueous phase. Radiation-induced free radical flux can lead to disruption of biomolecules like membrane lipids. INM-7035 completely inhibited lipid peroxidative stress in case of membranes against supralethal radiation stress in the liposomal system. The ability of INM-7035 to modulate the levels of NF-kappaB, indicated its inherent potential as a radioprotective bioactive constituent.

Protective effects of silybin and analogues against X-ray radiation-induced damage.

Silybin (SLB) and similar analogues, namely, hesperetin (HESP), naringenin (NAN) and naringin (NAR), are believed to be active constituents of natural flavonoids that have been reported as chemopreventive agents for certain cancers. Moreover, SLB and analogues have been determined to fast repair DNA bases from oxidative damage by pulse radiolysis techniques. The present study was designed to evaluate the protective effects of SLB and analogues on soft X-ray-induced damage to plasmid DNA in vitro. The DNA damage was determined by agarose gel electrophoresis. SLB and analogues were found to protect DNA from radiation damage at micromolar concentrations. Among the compounds tested, HESP and SLB were the most effective in preventing X-ray-induced formation of DNA single-strand breaks (SSB). A comparison of these results with other experiments showed that the ability of SLB and analogues to inhibit DNA damage in vitro correlated with the ability of the compounds to scavenge free radicals. Our work revealed that natural flavonoids, SLB and analogues may be used as potent radioprotectors against radiation damage.