Stinging Nettles As Food And Medicine

Spring Is The Time For Nettles 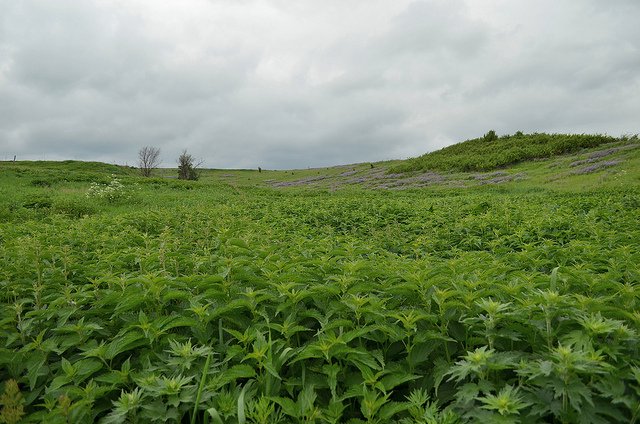 Soon it will be spring. Thoughts of spring cause my mouth to start watering in anticipation of tasty herbal greens waiting to grow out of the earth. You too can enjoy the bounty of spring. Let me introduce you to one of my special weed friends called stinging nettle.  Nettle is an edible and medicinal treasure provided freely from our wonderful and nurturing planet. It can be used both as a food as well as a medicine.

Where You Find Stinging Nettles

Nettle is a bold, strong plant that likes moisture and shade. You will find it growing near creek banks in partially shady areas. Nettle prefers moving water where its roots do not get bogged down in stagnant muck but it grows in the muck also, especially if there is high nitrogen in that muck. This plant tends to spread out by sending its rhizomes in all directions. Therefore you find the plant growing in thick patches. If you invite nettle to your home to live, provide a semi-shaded spot and give her plenty of liquids and a rich, well-drained soil. If she is grown in poor soil, she will enrich the soil herself. She does love nitrogen. If you give her a rich compost she will grow big and her leaves will be a very dark green.

Whats The Skinny On Eating Nettles

As a food both the roots/rhizomes and the aerial leafy parts can be eaten. Although the roots are fine as soup stock, I mostly eat the tops of the nettles, and I prefer the early, supple, spring greens best. The most choice part is the top 4-6 inches.

I usually stir fry Stinging Nettle or cook it in soups. I think it tastes like spinach with an attitude. It is much tastier than spinach. I have also eaten it as a pesto made by a lovely student (warning fresh pesto probably won't sting you if you grind it down really good, but no promises), as a side with fish and a nice sauce, in casseroles, and as a substitute for spinach in any recipe that is cooked.

How To Collect Nettles

Watch Out For Those Stingers

A few words of caution for those of you unacquainted with Stinging Nettle; treat this plant with utmost care or she will sting you.  Wear gloves when harvesting and processing nettles. I have more than once, been on a hike and been surprised by a patch of nettles. In my overwhelming glee at finding the first spring nettles, I have temporarily lost my mind and decided to collect them without gloves. Each time I have nursed my wounds, questioning such a crazy decision. No matter how carefully I harvest this tasty plant, she reminds me that she is protecting herself and she is to be respected. Luckily, once the plant is cooked the sting disappears and you can savor this delicacy without concern.

If like me, you decide to harvest without gloves, remember that the leaves do not have stingers on the top of the leaf and this will help guide you in how to collect it without so many stings.

I once spent the summer as a student volunteer helping a researcher named Anna MacIntosh who had been hired to run a variety of experiments for an herb company named Eclectic Institute. I spent most of an entire day that summer, pulling stingers off of Nettles with a pair of tweezers. Now that is dedication. I did find myself asking if this was a prudent thing to be doing with my time. By the way histamine, serotonin , and acetylcholine are concentrated in the fresh stinging hairs on the leaves.

In the Willamette Valley of Oregon, the best time to harvest the aerial tips for food is from the end of February to the end of March. They can be harvested to dry as a medicine up until they begin to go into flowering stage.

As far as the rhizomes, they can be harvested fall through spring. Harvest after the plant dies back and before it starts to grow again.

Caution About When To Harvest

Only collect aerial Nettles (the upper green parts) in the spring prior to flowering. Once it flowers, the aerial part is not safe to consume as a food or as a medicinal tea. After they flower they can be irritating and may inflame the urinary tract. 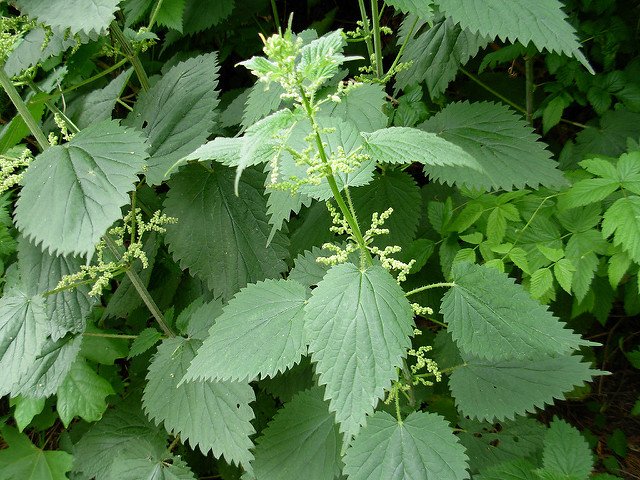 Why Nettles Are Used As Food And Medicine

High In Minerals And Vitamins For Nutritious Support

The abundant minerals in those leafy greens make it a wonderful addition to our diet.  Nettle is rich in potassium, calcium, magnesium, iron, phosphorus, sodium and silicic acid. Nettle also contains vitamin A, C and K as well as various B vitamins. The high mineral content may be part of the reason for nettle tea’s ability to reduce the severity and occurrence of leg cramps as well as menstrual cramps (magnesium specifically) and its ability to support strong bones. The high mineral content also benefits anemic (iron), undernourished individuals.

Stinging nettle is beneficial as a spring tonic and rejuvenator. As a medicine it tends to be very stimulating and drying. It has a supportive effect on our immune system, spleen, circulatory system, urinary tract, nervous system, respiratory tract, digestive system and the endocrine system; including the adrenals, thyroid, and the pancreas. It nourishes our entire body as well as nourishing us spiritually by increasing receptivity to the natural energetic flow of our spirit.

I find long term use of nettle can be beneficial for support of multiple body systems. An example is the lungs. People with hay fever use the tea daily starting a month or more prior to allergy season beginning. They find it decreases their allergy symptoms during the season if they start early and continue throughout the season. People with other recurrent lung issues such as asthma have also found it beneficial when used over time.

Nettles have shown in-vitro inhibition of several proinflammatory substances that cause the symptoms of seasonal allergies. This includes decreasing the release of histamine, as well as inhibition of prostaglandin formation through inhibition of Cyclooxygenase-1 (COX-1), Cyclooxygenase-2 (COX-2), and Hematopoietic Prostaglandin D(2) synthase (HPGDS), which are enzymes involved in the pro-inflammatory pathways. Nettle is thought to possibly have anti-inflammatory potential in allergic rhinitis by the following pathways: antagonizing H1-receptor, reducing of PGD2 production (allergy specific prostaglandin), and inhibitory effect on mast cell tryptase.

Nettle is also beneficial in excessive menstrual bleeding. It helps supply lost iron as well as helping to decrease the bleeding. Nettle favors elimination of uric acid and is therefore useful in gouty arthritis. It may be used as a diuretic. The root and seed are also diuretic. Nettle greens are best used long term in treating chronic illnesses.

A 2016 research study found a tea of Nettle was shown to significantly increase endothelial nitric oxide (and Super Oxide Dismutase) over an eight week period of treament for type 2 diabetes. This may be another reason for its ability to lower blood pressure other than its activity as a diuretic and supplying magnesium.

I am focusing on the leafy parts and have ignored the wonderful root and seed of this special plant. Both are used medicinally. The root is often used for BPH (benign prostatic hypertrophy), while the seed is used to support kidney and thyroid function.

The root is astringent, and has diuretic properties. It is used to arrest bleeding and to treat lower urinary tract symptoms in males (LUTS)/benighn prostatic hyperplasia (BPH). It has anti-inflammatory activity and has been shown to  inhibit aromatase. Aromastase is the enzyme that convenrts testosterone into estradiol and is implicated in BPH. Clinical studies show use of the root improves BPH symptoms such as reduced urinary flow, incomplete emptying of bladder, post urination dripping and the constant urge to urinate.

The seed has more recently (past 20 years or so) been used for kidney inflammation and to support people in chronic kidney failure. I have only used the seed in tincture form and in 1/2 - 1 teaspoon (that is equal to about 60-120 drops) per day, 2 times per day.

Nettles can be taken as a tea (1 cup 2 times per day), a capsule (3 capsules 2 times per day), or eaten as part of your food. I do not suggest tincture as the tincture will usually not have the minerals intact unless they were added back into the tincture in ashen form as is done in Spagyric tinctures. Since the minerals add to it’s effectiveness for respiratory support, a tea,  capsule or food would be more efficacious. Do not eat them fresh though as they will sting you. The part you want to use for vitamins and minerals is the aerial parts.

Tea - 1 tablespoon per cup of water as a decoction

Tea - ½ - 1 teaspoon per cup of water after crushing it a little and made as over night infusion, three times per day.

Besides building strong bodies with her minerals, Nettle also shares her strength with us in the form of strong rope that can be made from the skin of its stalk.

Nettle is listed as contra­indicated by many authors in pregnancy, due to emmenagogue and abortifacient effects. How­ever, the tea is sometimes consumed by pregnant woman to tonify the uterus and for the vitamin and mineral content. I have had trouble finding the data on Nettles causing abortions and I want to thank Francis Brinker who was kind enough to supply me with the data I was seeking. There is mention of its use in an Indian journal where it is listed as an emmenagogue that should not be used in early pregnancy. They mentioned it being used as a decoction. It has also been listed by Farnsworth in 1975 as having the active ingredients betaine and serotonin which have been shown to stimulate uterine tissue when used as an isolated substance. This is the only supporting evidence I can find for Nettles being an abortifacient. I can’t find any actual animal or human studies to support this.

The use of this plant as a raw green is contraindi­cated due to skin and mucous membrane irritation from the plant. This irritating and painful feature disappears when the plant is cooked well, or mashed to a fine pulp. Dried herb is usually safe, however I have had even dry herb cause irritation on the rare ocassion.

I would caution people who tend to be dry and thirsty that this plant will exacerbate that situation and this may not be a good herb for them. For anyone who tends to urinate a lot, be thirsty all the time and have low blood pressure, I would not suggest Nettles on a continual basis.