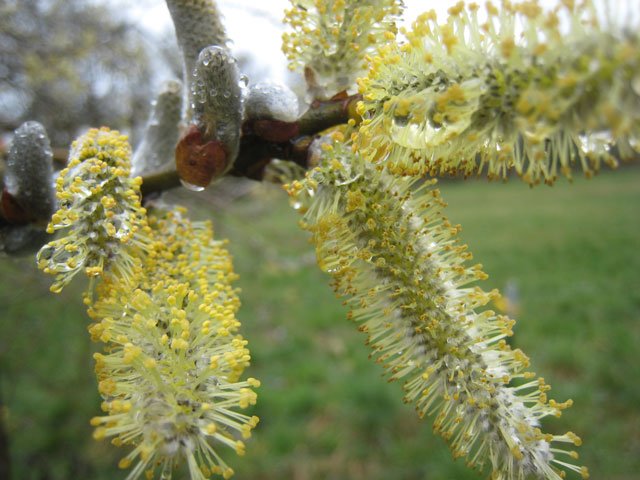 The pussy willows started poking their heads out today and the birds were eating them with relish. They were darting around the tree in an elated frenzy. Not a lot of fresh food available to the birds this time of year, so this was truly a celebration.  Goats also like to eat willow trees. They will eat every part of them.

The main thing herbalists use willow for is as an analgesic to relieve pain and an anti-inflammatory. It is sometimes used to lower fevers but generally herbalists are inclined to use relaxing diaphoretics and do not use willow for fever. The part used is the bark. Traditionally the bark is collected in the spring or fall. The medicinal part is the inner bark. Usually, herbalists will use the small to medium sized limbs with thin bark and simply use both the outer and inner bark since it is hard to remove them from each other. The bark is extracted as a tea or tincture and used for a variety of musculoskeletal aches and pains such as arthritis. It is also used for headaches. Just as aspirin (originally based on willow and other plants with salicylic precursors.) gets used for a variety of aches and pains so has willow been used in this way.  Willow is also very astringent and as such has been used as a general astringent for diarrhea and bleeding.

The Native Americans used willow bark for its astringent effect as well as using it to make string and used willow in basketry. Sometimes leaves were put into food baskets while cooking to improve flavor of the food. There is also mention of some tribes using the bark as an antidote for poisoning. This action was most likely due to the tannin content.

Willow is easy to grow. Simply cut a branch, stick it in the ground and it will usually grow if water is supplied. This is due to the natural root growth hormones called auxins in willow. You can soak willow branches in water and use this water to assist in stimulating root growth in other plant cuttings which may be harder to root.

For those of you who enjoy learning about constituents in plants the most researched constituent has been salicin. Although contained in Salix spp, Salix alba has specifically been studied a lot and contains the salicylate- forming glycosides, largely salicin and salicortin. Salicin and salicortin are metabolized by intestinal flora to saligenin, which is absorbed into the bloodstream and is metabolized by the liver to salicylic acid. This is the active compound that is eventually excreted by the kidney. Since salacin and salicortin are changed into saligenin in the gut and eventually salicylic acid in the liver, this by-passes the gastrointestinal tract, thereby avoids gastrointestinal irritation. Due to the process of changing into salicylic acid in the liver, it takes time to achieve pain relief or decrease inflammation and has to be taken into account when a practitioner is advising a patient to use willow for pain or inflammation.

Research compared a standardized willow extract and aspirin (ASA). On a mg/kg basis, the extract was at least as effective as ASA in reducing inflammatory exudates and in inhibiting leukocytic infiltration as well as in preventing the rise in cytokines, and was more effective than ASA in suppressing leukotrienes, but equally effective in suppressing prostaglandins. On COX-2, the willow extract was more effective than ASA. The present findings show that the willow extract significantly raises GSH (reduced glutathione) levels, an effect which helps to limit lipid peroxidation. The extract was more potent than either ASA or celecoxib. Higher doses of the extract also reduced malondialdehyde levels and raised shows definite superiority to either ASA or celecoxib in protecting the body against oxidative stress. It is therefore evident that willow extract is at least as active as ASA on all the parameters of inflammatory mediators measured, when both are given on a similar mg/kg dose. Considering, however, that this extract contained only 24% salicin (molecular weight 286.2), while the ASA has a molecular weight of 180.3, it follows that on a molar basis of salicin vs salicylate, the extract contains less than a sixth of the amount of salicin as the amount of salicylate in ASA. Thus it appears that the willow extract with its lower "salicin" content than an equivalent dose of ASA, is at least as active as ASA on the measured parameters, a fact that leads one to speculate that other constituents of the extract contribute to its overall activity. The presence of polyphenols in the extract probably plays a significant role in enhancing its free radical scavenging properties. The fact that the willow extract was superior to ASA in this respect would suggest that the extract may have a better anti-inflammatory effect than ASA on a weight to weight basis, with possibly less side effects.