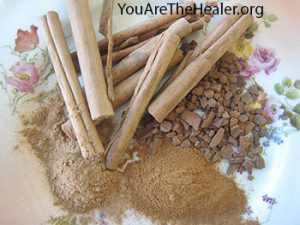 This Cinnamon (Cinnamomum verum) monograph is an excerpt from the first edition of Dr. Sharol's book "Herbal Medicine From The Heart of The Earth." You can purchase the 2020, third edition of this book with an expanded materia medica/monograph section, herbal formulas and directions on making herbal products in Dr. Sharol's Book Store. You receive free shipping in the USA. The expanded 3rd edition materia medica, and additional herbal tidbits are also available as a kindle ebook at Amazon and details about this e-book are here.

Mental picture and specific indications: Cinnamon warms and strengthens organs of digestion. It is beneficial for persons with low vitality and a tendency toward influenza. It is also for symptoms of stress with a tendency to diarrhea and rheumatic pains.

Cinnamon is specific for causing contraction of the uterine muscles and arresting bleeding, it is beneficial in the treatment of dysmenorrhea.  It is also indicated for passive pulmonary, gastric, intestinal and renal bleeding.

Cinnamon has anodyne activity that may be partially due to its prostaglandin-inhibiting action.

Cinnamon can stimulate and then depress the nervous system and has the ability to correct nausea and vomiting. Although small amounts are used for digestive irritation, large amounts can cause digestive irritation. It is useful at the onset of a cold or flu when there is chilliness, aching and sweating but with cold skin. It is also used as a lozenge for oral candida.

Contraindications:  Cinnamon is generally recognized as safe. However, do not use in large dosages or for extended periods of time. Although, doses exceeding 2 grams of Cinnamon powder have been reported to be narcotic and may cause convulsions, delirium, hallucinations and death, I personally have never seen anyone with these side effects. Cinnamon contact stomatitis is a reaction some people have had, and is thought to be from eating excessive amounts of Cinnamon, although the people may also be more sensitive to Cinnamon than other individuals. The reactions may include mouth sores, tongue, or gum swelling, burning, itching and white patches in the mouth. They recover within days of discontinuing the source of Cinnamon. (It is usually from an individual reacting to raw cinnamon, or cinnamon flavored gums, candies, mouthwash, toothpaste or other foods.) Skin irritation may also  take place in sensitive individuals. It is contraindicated in persons with a cinnamon sensitivity, or in pregnancy due to the emmenagogue effect. 400  Cinnamon contains coumarin and coumarin appears to have the potential to cause hepatotoxicity in rats, as well as a subset of people who have insufficient CYP2A6 activity to break coumarin down into safe catabolites. Unfortunately, the association between hepatotoxicity and CYP2A6 genetic polymorphism has not been well investigated. This variation has been found to be more common in  Asian populations. Extensive data about Cinnamon and coumarin can be found in this article on Safety of Cinnamon.