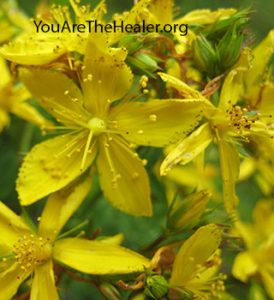 This Saint John's wort (Hypericum perforatum) monograph is an excerpt from the 1999, first edition of Dr. Sharol's book "Herbal Medicine From The Heart of The Earth." You can purchase the 2020, third edition of this book with an expanded materia medica/monograph section, herbal formulas and directions on making herbal products in Dr. Sharol's Book Store. You receive free shipping in the USA. The expanded 3rd edition materia medica, and additional herbal tidbits are also available as a kindle ebook at Amazon and details on this e-book are here.

Mental picture and specific indications: St. John's wort is specific for injuries to the spinal cord and nerves, including nerve injuries to fingers and toes. It is to be considered with all chronic pain in conjunction with nervous exhaustion or pain with a sharp shooting characteristic. It is indicated for depression due to feelings of isolation, lack of community and a sense of being disconnected from the rest of the world. St. John's wort facilitates the body receiving sunlight.

St. John's wort is used for depression, fear, insomnia, anorexia, anxiety or feelings of worthlessness. Usually the herb needs to be taken long term to see results in alleviating anxiety and depression. Results are usually seen within 2-6 weeks, although some people report immediate effects.

Saint John’s wort (SJW) is indicated for depression due to feelings of isolation, lack of community and a sense of being disconnected from the rest of the world. St. John’s wort facilitates the body receiving sunlight. The antidepressive effect of St. John's wort appears to partially be due to blocking the resorption of serotonin by postsynaptic receptors.

Contraindications: St. John’s wort is contraindicated during pregnancy due to the emmenagogue and abortifacient effects. Photosensitivity may be possible from its ingestion. I have even seen it make people more sensitive to sunburns when they use the St. John’s wort oil on their skin prior to going outside. Since St. John’s wort appears to inhibit serotonin uptake, and combining serotonin uptake inhibitors with monoamine oxidase(MAO) inhibitors can cause dangerous rises in blood pressure, until more information is available it would be unwise to combine St. John’s wort with MAO inhibitors. This herb is a known  inducer of the cytochrome P3A4, P1A2 and P2C9 enzyme system as well as P-glycoprotein. One  study showed it took one week after cessation of saint John’s wort for P3A4 to return to its basal level in human subjects. It appears that SJW  may reduce plasma levels of many drugs. In some cases it may increase levels of a drug.  Drugs processed by the cytochrome P3A4, P1A2 and P2C9  enzyme systems and P-glycoprotein will be effected by St. John’s wort. A list of drugs effected by SJW includes but is not limited to HIV protease inhibitors (indinavir, nelfinavir, ritonavir, saquinavir);  HIV non-nucleoside reverse transcriptase inhibitors (efavirenz, nevirapine, delavirdine); graft antirejection drugs such as cyclosporine and tacrolimus; the blood thinner warfarin; digoxin; theophylline; anticonvulsants (carbamazepine, phenobarbitone, phenytoin);  oral contraceptives; SSRIs and related drugs (citalopram, fluoxetine, fluvoxamine, paroxetine, sertraline, nefazodone); and  triptans (sumatriptan, naratriptan, rizatriptan and zolmitriptan). Sleeping time of narcotics is enhanced and the effect of reserpine is antagonized. 404 St. John’s wort extract, by inducing both the CYP3A4 and the P-glycoprotein (P-gp), can reduce the plasma concentrations of different antineoplastic agents such as imatinib, irinotecan and docetaxel, thus reducing the clinical efficacy of these drugs