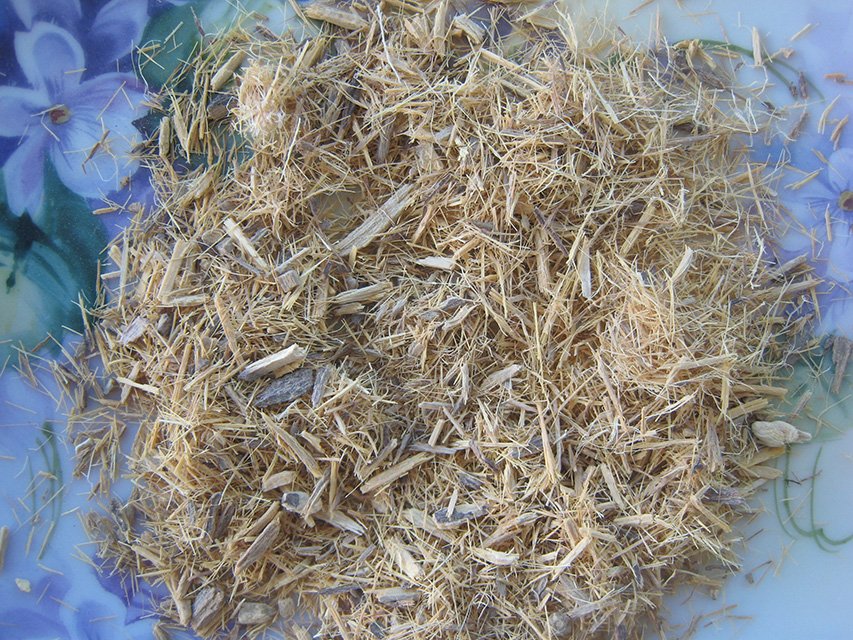 A 54 year old man died from eating an excessive amount of licorice candy.  He had been eating about 1 1/2 bags of licorice per day. He suffered a cardiac arrest that was thought to be due to hypokalemia (low potassium) due to the licorice candy. I say "thought" to be from the licorice candy as no where does anyone identify the name of the candy or provide any scientific proof that the candy actually contained real licorice as many of them do not. However, it appears that this was the cause of his death.

Background information on the gentleman is that he ate poorly, ate a lot of candy and apparently, he had symptoms prior to the heart attack. I am going to guess based on his diet that he might have predisposing illnesses that would make him more likely to have a reaction to the pseudoaldosteronism activity of licorice.

Licorice is made into a common candy and also used as a common medicinal herb. Licorice is used as a candy as it is naturally sweet. A photo of the raw licorice root is at the top of this page. You will find this herb in many herbal formulas, especially Chinese herbal formulas. Some of the indications in western herbal formulas would include some liver issues, a variety of gastrointestinal disease, general inflammation, hormonal related issues of women, and some viral illnesses.  However, as this man sadly found out, in excess licorice can be toxic. Something the news does not mention, is that a poor diet (in his case eating in fast food restaurants and eating lots of candy) in excess can also be toxic and lend one to having inadequate electrolytes. It apears both were a factor here.

How Licorice Can Be Toxic

This man died from eating licorice candy. How can that be? Afterall, it is a food. Licorice contains glycyrrhizin and a metabolite called glycyrrhetinic acid which can both cause a reaction known as pseudoaldosteronism, meaning the licorice mimics the activity of aldoserone. Aldosterone regulates sodium and potassium excretion by the kidneys. Licorice causes a person to retain more sodium in the body and excrete more potassium. This man had low potassium, which was probably caused by a mix of a poor diet as well as the licorice.

Some People Should Not Consume Licorice

This is not the first man or women who has died from eating licorice candy and will probably not be the last. So, education is key to stop more people from this same sad ending.

All of us need to be careful about the food and herbal medicine we ingest. However, people who have pre-existing conditions need to be especially careful. When I want to include licorice herb in a formula for a client, I ask first if they have high blood pressure or edema. I also want to know if they have kidney problems, heart problems or liver issues as these are three common organ areas where a prior health condition might cause increased blood pressure and edema.

In general for the healthy individual doses of 3 or more grams a day should not be taken for more than 6 weeks unless monitored under the guidance of a qualified health care practitioner. This is in a healthy person mind you, and this man sounds like he might not have been healthy based on the fact that he was eating a lot of candy and eating at fast food restaurants.

Elderly people are more prone to pseudoaldosteronism due to a greater increase of glycyrrhetinic acid levels from increased production by their gut bacterial enzymes on glycyrrhizic acid. Therefore, they should be exceptionally careful and use even smaller doses as suggested by their practitioner.

Licorice can cause side effects when consumed in excess or when the person is sensitive to licorice due to health conditions. Following are the common side effects that may be seen from licorice in either of these cases. These would be initial symptoms this man might have experienced and should have been a clue for him to re-evaluate his situation and see his practitioner.

These symptoms would usually cease when the person stops taking the licorice or if antialdosterone agents are used. If a person ignores these symptoms and continues consuming the licorice as this person unfortunately did, they can end up having a heart attack as in this case.

Licorice potentiates the activity of anthraquinone drugs or herbs containing anthraquinones, like cascara and buckthorn, by increasing the wettability of the bowel contents because of the high surfactant activity of glycyrrhizin. It also potentiates the toxicity of cardiac glycosides like digitalis due to potassium loss in the urine. There may also be an additive effect with thiazide diuretics. When used with corticoid treatment, glycyrrhizic acid interferes with delta 4, 5 beta-reductase breakdown of corticosteroids, thus prolonging their biological half-life.  When someone discontinues the use of licorice after consuming it over a long period of time, they should withdraw from it slowly, unless they are discontinuing it due to side effects. In the case of dangerous side effects, they should immediately withdraw from its use. You will additioinally see lowered magnesium that is decreased along with potassium. Not as serious a condition, but with so many people low on magnesium already, it can cause side effects such as muscle spasms or tics.

Raw licorice herb can have  anwhere from 2-9% glycyrrhizin it. This is the ingredient along with the metabolite called glycyrrhetinic acid that causes pseudohyperaldosteronism. There are products on the market labeled as DGL licorice. DGL stands for deglycyrrizinated licorice and these products are suposed to have 3% or less of glycyrrhizin in them. These products exist to decrease the liklihood of someone having symptoms from using Licorice. However, I have seen individuals have their blood pressure raised while taking this product, so I would tell people to be cautious even with these products.

For people who  have predisposing health conditions causing them to be more likely to react to this herb, licorice is contraindicated as a candy or an herbal medicine.  For individuals who are not in this category, this herb can be useful for numerous health issues. I commonly use licorice as part of a health care plan for many individuals and some of the conditions that respond well to it would include CIRS-from water-damaged buildings (Mold illness), viral illness such as mononucleosis and the flu, topical for canker sores and herpetic sores, allergies, some liver disorders,  polycystic ovary syndrome, stomach ulcers, reflux, intestinal inflammatory conditions, menopause, and gingivitis. I always think of this herb when there is something inflammatory going on. It is usually not the main herb in a formula, but often it is an important part of the overall formula.

I use it as a tea, tincture, capsule, tablet and topical application.

If I have any concern about it being problematic for a specific individual, I tell them to monitor their blood pressure. If their blood pressure raises, I tell them to contact me. Additionally, if a practitioner wants to give a client licorice but is concerned about pseudoaldosteronism, they will sometimes give the person potassium and magnesium supplmenation to make up for the loss that would be seen due to licorice use. This needs to be carefully evaluated as to if it is a safe way to approach the situation on each individual basis.

It is sad this man died from eating licorice candy. We can all learn from this experience that moderation is key with diet. Hopefully, you will now recognize individuals who are more prone to pseudoaldosteronism and know when they should not be using licorice.