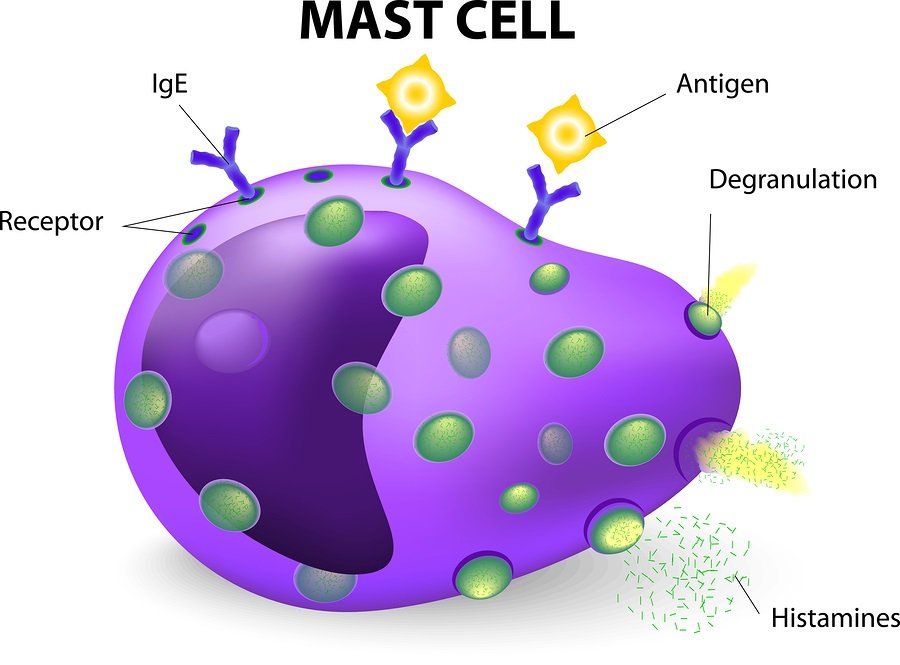 Mast cells are an immune cell in the bodies immune system. They are made in the bone marrow and present in most tissues of the body. They are found in connective tissue all through the body, especially under the skin, near blood vessels and lymph vessels, in nerves, and in the lungs and intestines. You find them in the largest amounts in tissues that are associated with the outside world. Their primary job is to coordinate how the immune system and the nervous system respond to infections and toxins.

Mast cells help control types of immune system responses and help repair tissues. They contain chemicals such as histamine, heparin, cytokines, and growth factors. They release these chemicals during certain immune responses and allergic reactions. These chemicals have many effects, including the widening of blood vessels and creation of new blood vessels. Although, they are a necessary part of body function they are also responsible for promoting inflammatory and allergic reactions.

This is the process of the mast cell being activated and then releaseing the chemicals that are inside of it, such as histamine, serotonin, eicosanoids such as thromboxanes, leukotrienes and prostaglandins, as well as inflammatory cytokines like TNF-alpha, chemokines and IL-4, and ATP.

Symptoms usually come on quickly. Keep that in mind.

If the symptoms appear to be related to eating or drinking something and come on quickly afterwards, it may be a mast cell activation. Any symptoms developing within minutes after putting a substance in your mouth should make you ask if this is a mast cell reaction.

How Mast Cells Are Activated

Many symptoms, but the most common would be reacing to a food or drink within 15 minutes after eating it.  If immediately after eating or drinking something the person's skin flushes and they start to sweat, their heart races, get itchy, hives appear on the skin, they feel anxious, have abdominal pain and get diarrhea, then they should ask their Doc to consider Mast Cell Activation Disorder. Mast cells release 200 or more chemicals that can cause reactions.

urinary levels of N-methylhistamine, 11B-Prostaglandin F2alpha and/or Leukotriene E4 are the tests used to diagnose MCAS.

Total serum mast cell tryptase should be drawn between 30 minutes and two hours after the start of an episode, with baseline level obtained many days later. The urine tests are performed on a 24 hour collection of urine that is started immediately.

The problem with testing for any of the chemicals released by mast cells is that they disappear extremely quickly and if you don't test while in the middle of an episode, your test will likely come up negative.

You can also test for IgE and to IgE receptors can be tested for (anti-IgE, IgG) to rule out autoantibody medicated mast cell activation.

Testing for the patients who are genetically negative for  KIt-D816V to rule out the rare condition known as mastocytosis. Mastocytosis is something different than mast cell activation we are discussing here.

The best thing to do if a person has a Mast cell activation disorder is to figure out what is triggering it. Look for the toxins from the environment or pathogens. Then take care of them. This should stop the mast cell activation. In the mean time, while figuring this out and treating the issue, there are many things that can be done to make the person feel better.

All foods considered to be high histamine should be suspect as they can add fuel to the fire going on in your body. You are reacting to histamine released by your immune system and high histamine foods will bother you if you run out of one or both enzymes that remove histamine (usually diamine oxidase or DAO). Histamine can be metabolized in 2 ways: by oxidative deamination by DAO (former name: histaminase) or by ring methylation by histamine-N-methyltransferase (HNMT). DAO is released into the circulation and  is concentrated in the small intestine where it neutralizes the histamine in food or histamine made by some gut bacteria from histidine in your food. HNMT breaks down histamine at an intracellular level. It is found in high levels in the liver, and kidney and is important at breaking down histamine in the nervous system. HNMT is also important in the airway, where it protects against histamine in these tissues, including the bronchial epithelium where it protects against histamine induced asthma. Most people make plenty of these enzymes to take care of the incoming histamine, however when mast cells are releasing a lot of histmine, there is not enough enzymes to deal with it. Besides running out of  enzymes, they may not have enough of the necessary nutrients to make the enzymes that degrade the histamine, or they might have a decreased ability to make these enzymes for genetic reasons.

There are both foods high in histamine as well as foods that compete for the same enzymes needed to degrade histamine and foods that trigger mast cell release of histamine. All these categories will add to the histamine load and inflammation in the body for people who are sensitive. Foods high in histamines include alcohol (think red wine, beer), aged meats, spoiled meat, shellfish and fermented products Then there is the fact that histamine is made from the amino acid histidine. A carboxyl group is removed from the amino acid histidine and it becomes histamine. Some bacteria and yeast can change histidine in foods to histamine, which is why fermented foods containing protein can be high in histamine. Some gut bacteria can turn histidine in foods into histamine also. This means a person with dysbiosis (gut bacteria imbalance) may end up making histamine from any high protein food containing histidine. Such foods are beef, bison, pork, parmesan cheese, pork, chicken, turkey, lamb, soy, fish such as tuna, catfish and to a lesser degree seeds, nuts and beans and even lesser degree, grains. Here is a list of foods high in histidine. Note that some cuts of meat are lower than others from the same animal.

There are also some foods that trigger histamine release from mast cells. These include fruits such as chocolate, nuts, shellfish, bananas, tomatoes, kiwi, lime, lemon, pineapple, papaya and plum. Additionally some additives such as MSG, sulfites, nitrites, benzoate and artificial food colorings can increase histamine reactions in the body.

There are some drugs known to block HNMT.

If an individual is taking one of these drugs, they may be adding to the excess histamine level in their body.

• Folate antagonists such as metoprine (HNMT requires folate for activity)

For people who have been diagnosed with histamine intolerance, or mast cell activation disorder, there are all sorts of things that can support them. Here are a few ideas.

DAO with meals - Besides avoiding high histamine foods or foods that induce histamine release, some people take DAO 30 minutes before eating a meal.

Help with gas and bloating

If there are pathogens found on testing, they must first be dealt with or no amount of healing activity will give persistent relief.

There are many herbs that stabalize mast cells and keep histamine from being released.

Foods high in a class of polyphenols called flavonoids are able to assist in decreasing mast cell activation and reduce histamine in the body.  These flavonoids include quercetin and catechin which are found in herbs such as Green tea, Chamomile, Hawthorne and Gingko. Quercetin is found in many foods/herbs and some good choices for quercetin content are garlic, onions, capers, fruits with dark red or blue colors such as blueberries and cranberries.  Elderberries are high in quercetin as well as Lovage and kale. Quercetin’s anti-inflammatory activity appears to be due to its antioxidant effects and inhibition of cyclooxygenase and lipoxygenase, which in turn regulate the inflammatory mediators leukotrienes and prostaglandins. Quercetin has been shown to stabilize mast cells, which inhibits release of histamine.

“I welcome donations through my company Wise Acres LLC, of any amount in lieu of using ads, and thank you!” Please use the Pay Pal button below.