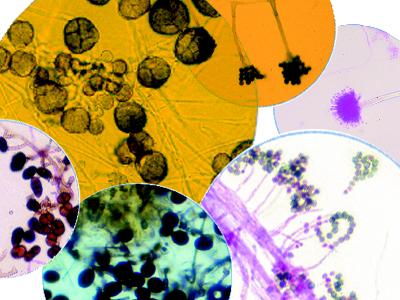 What Is A Mycotoxin

Mycotoxins are chemical compounds produced by actively growing molds (fungi) as secondary metabolites that show toxic effects on living beings such as humans, animals, plants and microorganisms. Secondary metabolites such as mycotoxins are not necessary for normal metabolic function of the fungus. Mycotoxins help a mold maintain their niche in nature or your home. Mycotoxins are made by molds to suppress bacterial growth as well as other molds in nature and as a side effect when ingested, respired or absorbed into our bodies can affect the flora living in our body and the eukaryotic cells that make up our bodies. Mycotoxins are small, some as small as 0.1 micrometer which is 1/100th the thickness of a hair on your head.

Mycotoxins are a type of biotoxin (biological toxin). Other biotoxins would include things such as wasp venom and snake venom. This gives you an idea of how toxic mycotoxins can be. Now that you realize mycotoxins can be extremely toxic, lets take a closer look at them.

When under the right conditions, as molds grow, some molds may produce potentially toxic byproducts called mycotoxins. Molds that produce mycotoxins are often referred to as toxigenic fungi. Some of these molds are commonly found in moisture-damaged buildings. More than 200 mycotoxins from common molds have been identified, and many more remain to be identified. The amount and types of mycotoxins produced by a particular mold depends on many environmental and genetic factors. No one can tell whether a mold is producing mycotoxins just by looking at it. Some mycotoxins are known to affect people, but for many mycotoxins little health information is available. Research on mycotoxins is ongoing. Exposure to mycotoxins can occur from inhalation, ingestion, and skin contact. It is prudent to avoid unnecessary inhalation or other exposure to mold.

Please see the bottom of this page for a listing of problematic mycotoxins and links to additional data on them. (As I get it written.)

Some compounds produced by molds have strong smells and are volatile and quickly released into the air. These compounds are known as volatile organic compounds (mVOCs). Because mVOCs often have strong or unpleasant odors, they can be the source of the "moldy odor" or musty smell frequently associated with mold growth. A moldy odor suggests that mold is growing in the building and should be investigated.

The health effects of inhaling mVOCs are largely unknown, although exposure to mVOCs has been linked to common symptoms such as headaches, nasal irritation, dizziness, fatigue, and nausea as well as other symptoms.

Mycotoxins are toxic chemicals produced by fungi. They are secondary metabolites believed to be used by fungal organisms as a protective mechanism. The mycotoxins are not necessary for the fungus to live but they do help give them an advantage in their environment. Mycotoxins appear to be a method that fungi use to protect their terrain and allow them to thrive and proliferate. The process of making mycotoxins takes energy, so mycotoxins are only created as needed by the mold. Mycotoxins can be hazardous to humans and animals. In fact, within a host fungi may use mycotoxins to weaken that hosts defenses so they may grow and thrive.

The mycotoxins produced by a fungi and the severity of their toxicity depends on their surrounding environment as well as the type of fungus itself. What the fungi is growing on, the humidity and the temperature are all factors at play. Other organisms in the environment of the fungi, other chemicals etc. can also affect the type of mycotoxins and their toxicity. The more threatened a fungus is by its environment, the more mycotoxins it may produce to protect itself.

Mycotoxins have been shown to cause damage in animals and humans from ingestion, contact wtih skin and inhalation.  Some mycotoxins are more dangerous than other mycotoxins. As a group, mycotoxins can't be put into categories based on adverse effects they cause, as these are varied along with the different properties of the varied mycotoxins.

Mycotoxins can be hazardous to anyone but to the genetically susceptible mycotoxins are particularly dangerous. They can be tested for this genetic variation. Ongoing exposure to mycotoxins can make these people very ill.

Mycotoxins in the body may be the result of external exposure to molds or internal, colonizing fungal organisms. They are generally found intracellularly and may be stored in body fat, myelin, organs and other body sites. They can cause many different types of symptoms.

The fate of a mycotoxin in the body depends upon its intestinal biotransformation and the extent and rate of its absorption from the gastrointestinal tract, distribution, its binding or localization in tissues such as storage in fat or bone, its biotransformation in the liver cells and other cells of the body, and its excretion processes including enterohepatorecirculation. Mycotoxins can have both acute and long term effects.

Most research on mycotoxins is on animals ingesting mycotoxins in food. The various sensitivity of animals to mycotoxins is due to a variety of factors that include species, breed, sex, physiology, age, nutrition, health or disease, as well as environmental factors.

Data obtained in the last three decades has given a better understanding of biotransformation pathways of mycotoxins and their consequences in terms of metabolites occurring in animal-derived food products as well as human food. More recently, society has become aware that mycotoxins are a major problem in human food as well as in water-damaged buildings.

Mycotoxins are extremely stable and resistant to the commonly used physical and chemical treatments of food and feed processing. They tend to persist in food and buildings without proper actions to eliminate or reduce them.

There are estimated to be 1.5-2.5 millions species of fungi in the world and of those the Center for Disease Control says 75,000 of them have been identified and classified, while about 300 of them are actually known to be pathogens to humans. It is currently though that about 1000 mycotoxins exist.  We will be covering the more common mycotoxins in food and in the environment (your home, work, school) that may be an issue. I will get this data up here as I have time.

Infamous Molds These Mycotoxins Come From

Stachyboytrys , Fusarium, Aspergillous, Penicillium can all live in our lungs and blood stream symbiotically - may be activated by stress, plastic, hormones in meat supply

This list if from a review of Aflatoxins in  Poultry production and published 7/12/2019.

I think this list is incomplete personally, and think there are other additional mycotoxins that could be on this list. However, I will wait until more research is done before I add them.

Labs That Test For Mycotoxins In Foods

“I welcome donations through my company Wise Acres LLC, of any amount in lieu of using ads, and thank you!” Please use the Pay Pal button below.