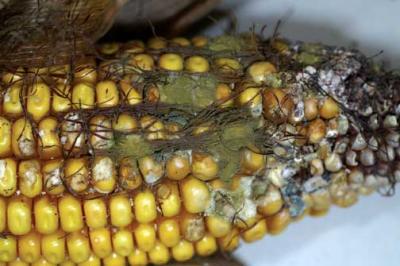 The primary mycotoxins affecting corn are aflatoxin and fumonisin. Below I give you the basics. If you want to know more there is detailed data on aflatoxins at this link.

Aflatoxin is produced by two fungi, Aspergillus flavus and Aspergillus parasiticus, and they can infect corn kernels in the field and during storage. The fungi can be recognized by yellow-green (A. flavus) or green-gray (A. parasiticus) mold on the corn. The fungi will overwinter on plant residues and can produce abundant spores if conditions are favorable.

Humans can get aflatoxin poisoning from corn directly or it may be in the meat or milk an individual is drinking.

Dairy May Contain Aflatoxins
Dairy animals may be eating feed with aflatoxins in it as they are often fed corn. Those aflatoxins are turned from AFB1 to AFM1 in the milk. Both humans and animals transform AFB1 to AFM1. AFB1 can be biotransformed in humans and animals by the cytochrome P450 system, specifically CYP1A2 changing AFB1 into the AFM1 metabolite which can be excreted through breast milk and has been found in milk from dairy animals as well as in human mothers who are nursing. In studies of animals the ingestion of AFB1 results in a dose dependent excretion of AFM1 in milk. This aflatoxin can end up in dairy products such as cheese or yogurt.

Since AFM1 is dose-dependently excreted in urine after ingetsion of AFB1,  it can be measured in the urine as either AFB1 or AFM1.  AFB1 is thought to be twice as toxic as AFM1. I would point out that moldy food that is pulled from human consumption is often fed to animals. No one seems to pay enough attention to the fact that aflatoxins are excreted in the milk of dairy animals and humans are drinking it.  Additionally, mycotoxins have been shown to build up in tissues including muscles of animals and that meat may be eaten when someone consumes the meat from animals fed moldy food.

Aflatoxins are known to be hepatotoxic (liver toxins), teratogenic (causes malformations of an embryo or fetus), mutagenic or genotoxic (causes mutations in genetic material), carcinogenic (cause cancer), nephrotoxicity (kidney damage) and immunotoxic (harm the immune system). They also have been shown to cause reproductive damage, inhibit pancreatic enzymes, decrease bile salts, clotting factor synthesis, decrease glucose metabolilsm as well as the creation of fatty acids and phopholipids. Afltoxins have also been shown in animals to decrease bile acids and bile production. Additionally, aflotoxins have been found to effect some nutrients. They lower A and D as well as zinc, selenium and iorn.

Even at low levels aflatoxin may have devestating effects. A study with chicks from hatching stage until 3 weeks of age showed low levels of aflatoxin produced a malabsorption syndrome characterized by steatorrhea, hypocarotenoidemia, and decreased concentrations of bile salts, and pancreatic lipase, trypsin, amylase, and RNase.

In humans it appears the liver is the organ that appears to take the hardest hit by aflatoxins, ultimately causing liver cancer and death. This has been quite evident in exposure to humans in India where it has become a huge issue due to more extensive exposure to contaminated food.

Variables That May Increase The Reaction To Aflatoxin

It is known that some people have genetic susceptibilities that cause them to be more sensitive to mycotoxin exposure. Additionally,  severe aflatoxin exposure is found more in underdeveloped countries where there may be more chance of malnutrition.

Most of the aflatoxin research is with animals, and it has been shown that different breeds of animals can be effected in dissimilar manners. Also age, sex, metabolic rates, duration of exposure, nutritional status and other disease processes can change how aflatoxins affect animals in studies.  It is important to note that even in lower levels of exposure, researchers have noted suppressed immune systems of animals in both the cellular, and humoral  part of the adaptive immune system. The animals have been shown to be more susceptible to fungal, parasitic, bacterial and viral infections due to low level exposure to aflatoxins.

Aflatoxin And Hepatitis B Together Increase Incidence Of Liver Cancer

More details on handling contaminated grain and growing tips to keep aspergillus from growing can be found here.

Aflatoxins are bound by clays such as montmorillonite, Sodium and Calcium bentonite, (lots of studies with the calcium montmorillonite clay called Novasil™ that is fed to animals in their feed) and clinoptilolite. Gliotoxins may also be bound by bentonite clay.

Most of the toxicity of aflatoxins appears to be related to the metabolism of AFB1. Aflatoxin induced carcinoma appears to be due to AFB1 being metabolized in the liver primarily (as well as other cells) via the cytochrome P450 enzyme system to a carcinogenic metabolite called AFB1-8,9-epoxide (AFBO) by the action of mixed function mono-oxygenase enzyme systems CYP450. AFB1-8,9-epoxide is highly unstable, and it reacts with cellular nucleophiles and can induce mutations by alkylating DNA. A study demonstrated a dominant contribution of CYP3A4 homologues in AFBO production. Use of CYP3A4 inhibitors like troleandomycin have been shown to inhibit AFBO production, while inducers of CYP3A4 activity such as 3-methylcholanthrene and rifampicin, increase AFB1 metabolism in cultured human hepatocytes . CYPs may also catalyze demethylation to aflatoxin P (AFP1) of the parent AFB1 molecule, resulting in products less toxic than AFB1.. Inhibition of AFBO formation (through disruption of the cytochrome P450 system) and/or adduct (DNA bound to a cancer causing chemical) formation are important strategies for prevention of these damaging mutations. Conjugation of AFBO with glutathione is a method to remove this toxic compound, so glutahione and glutathione S-transferase plays a critical role in the protection of tissues from  AFBO. In animal models, metabolic detoxification of AFBO is facilitated by induction of glutathione S-transferase (GST). This enzyme catalyzes the reaction that binds glutathione to AFBO and renders AFBO noncarcinogenic.

Read more about this in the aflatoxin article on this website.

The fumonisins are a group of mycotoxins produced primarily by Fusarium verticillioides and Fusarium proliferatum, although a few other Fusarium species also may produce them. There are at least 28 different forms of fumonisins. Fumonisin B1 is the most common and  important form, followed by B2 and B3. Fumonisons as a group are the second most prevalent mycotoxin worldwide. They act synergistically with other mycotoxins and are a problem in animal rearing on farms due to the common use of corn as animal feed.

Corn is the crop most commonly contaminated by fumosin, and fumonisins are the most common mycotoxins found in corn, although these toxins can occur in a few other crops as well.

Fumonisin-producing Fusarium spp. cause a disease in corn known as Fusarium ear rot. Fumonisins can contaminate the corn kernal for human food, or livestock feed, as well as silage. Infection is increased if the corn kernels are physically damaged, especially by insect feeding. Fungal growth and fumonisin production cease when grain is dried below about 19% moisture content, but the fumonisins remain toxic, and the fungus can grow and produce additional fumonisins in storage if proper humidity conditions are not maintained. Fumonisins can be found in a few other crops, typically at low levels.

There is a close structural similarity between fumonisin and sphingosine, and fumonisins are the first known naturally occurring inhibitors of sphingolipid biosynthesis. Sphingolipids are a second type of lipid found in cell membranes, particularly nerve cells and brain tissues. One route of toxicity from fumonisin B1 is  via inhibition of ceramide synthase that catalyzes the formation of dihydroceramide from sphingosine. This mechanism of action may explain the wide variety of health effects observed when this mycotoxin is ingested like high rate of human esophageal cancer and promotion of primary liver cancer.

Fumonisins are classified as possible human carcinogens. They are known carcinogens in animals. Although, the research on human toxicity is needing to be undertaken, there is animal research. Horses that are poisoned with fumonisins may develop a fatal disease known as equine leukoencephalomalacia. Symptoms of this disease include drowsiness, blindness, staggering, and liquefaction of brain tissue. Pigs that are poisoned with fumonisins may experience reduced feed intake and weight gain, liver damage, and can develop pulmonary (lung) edema, in which the animals' lungs are filled with fluid. Fumonisins are carcinogenic to laboratory animals, and in humans, consumption of fumonisin-contaminated corn appears to possibly be associated with higher rates of esophageal cancer, and neural tube birth defects although this is inconclusive.

Unlike aflatoxin that can be bound with bentonite clay binders, fumonisons have not been shown to be bindable in most animal research. Enzymes are being used for farm animals, to transform fumonisins in their food into nontoxic metabolites.

I did find some research showing fumonisins have bound to cholestyramine (85%) better than activated charcoal (62%) or bentonite (12%) or celite (0) in vitro. The problem with studying binders in vitro is that this does not always tranlate to what happens in the body. In a study of rats fed fumonison there was a significant reduced effect from treatment with cholestyramine. We can't be sure humans will react the same, but in theory it might work to use cholestyramine for fumonisin toxicity. Cholestyrmine is not used usually in animal mycotoxin studies as a binder, so more research is necessary.