Testing urine for mycotoxins can be helpful if you want to see if your patient has a specific mycotoxin load or to follow how severe that load is. This type of test, examines the excretion of mycotoxins in the urine only at that one time. This does not tell us anything more than that. However, it can be useful. Finding specific types of mycotoxins tells us that the person is being exposed to either external mycotoxins in their environment or in their body. With some specific mycotoxins it may lead us to consideration of colonization in the gut or respiratory tract. The most likely scenario though is that the mycotoxins are coming from ingestion of food or from the environment.

There are additional lab tests that can help to identify biotoxin illness such as CIRS-due to water-damaged buildings (mold illness).

Real Time Laboratories (RTL) offers testing for three types of mycotoxins in the urine using ELISA technology that relies on antibodies. Please note this is antibodies and they are not testing for actual mycotoxins.

They are Tricothecenes, Aflatoxins and Ochratoxin .

Tricothecenes are evaluated by using Enzyme-Linked ImmunoSorbant Assay (ELISA). The test at RTL has been validated as a qualitative test. Thus, RTL reports whether tricothecenes are PRESENT or NOT PRESENT.

Aflatoxins are evaluated using ImmunoSorbant Columns containing antibodies to the group of aflatoxins (B1, B2, G1, and G2). Results are reported as PRESENT or NOT PRESENT.

Ochratoxin A is evaluated using immunoSorbant Columns containing antibodies to the Ochratoxin A. Results are reported as PRESENT or NOT PRESENT.

Specimens that have been validated are urine, sputum, nasal washes, tissues. To discuss cost of these tests, please call the laboratory. You don't usually find mycotoxins in the blood as macrophages pick them up and remove them by storing in tissue.

Great Plains Laboratory has a test called GPL-MycoTOX Profile that uses liquid chromatography mass spectrometry (LC-MS/MS) technology. They claim to be able to detect mycotoxin amounts in the parts per trillion for many of the mycotoxins they test.  They test 8 mycotoxins that are commonly made by the molds Aspergillus, Penicillium, Stachybotrys, and Fusarium. Some of these mycotoxins may be made by other molds also, but are most commonly associated wtih these molds. Please note that mycotoxins can be conjugated or broken up into other metaoblites that will not be picked up by this test.

Aspergpillus: aflatoxin, ochratoxin, patulin and fumigillin - includes aflatoxin M1 which is the main metabolite of aflatoxin B1.

The mycotoxins they test for are:

As of 2018 they are able to detect over 40 different strains of disease-causing mold. Here is a table that illustrates all of the different mold species that they can now detect: 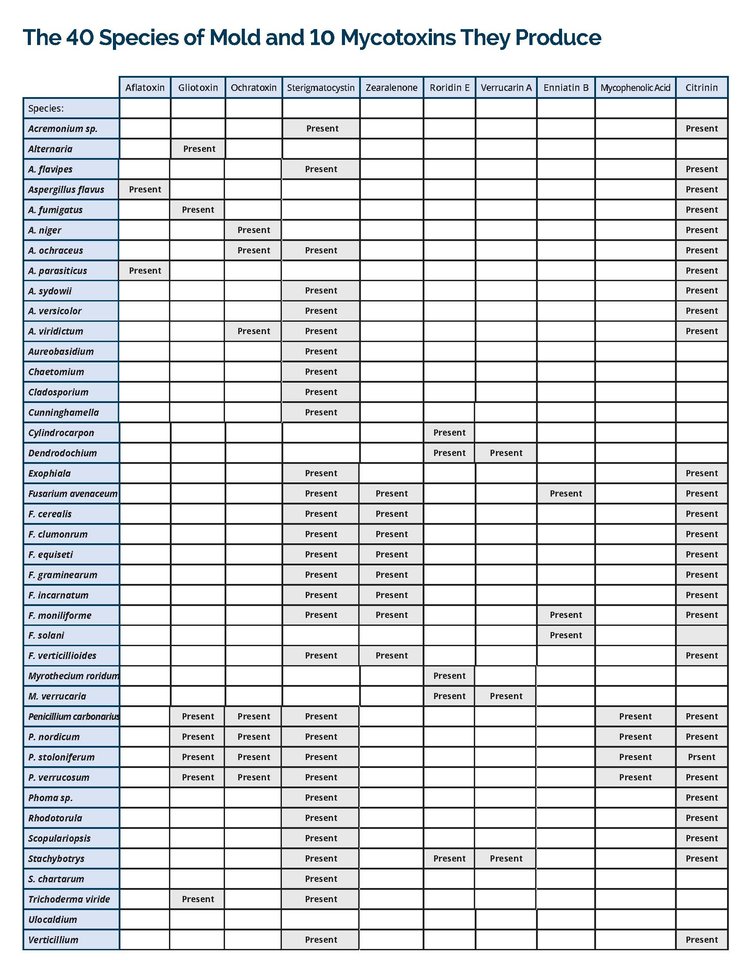 GPL also offers a Mold IgE Allergy Test to determine if a person is having an IgE or allergic reaction to molds. They test blood serum for reaction to mold spores or mold cell components using ELISA testing.

Vibrant Wellness offers a urine-based assay for 31 of the most common mycotoxins produced by molds to which humans are exposed. This test is measured on their proprietary microarray platform, to produce the most accurate and clinically relevant assessment of difficult-to-detect toxins that can cause serious disease in humans. The mycotoxins they test for are listed below.

Other Types of Testing

Urine testing for mycotoxins is just one type of test used by practitioners to help them diagnose and follow a patient who has been exposed to toxins in a water-damaged building. Other tests can be considered. They include testing for inflammatory markers, endocrine testing, testing for autoimmune illness, allergies to mold/mycotoxins and others. This link will take you to a page that gives you a list of the many tests that may be considered.

Additionally, there are various blood tests for antibodies to either mold or mycotoxins that can be undertaken to see if a person is reacting to either mold or the toxins it makes. These are listed in the article Testing For Mold Illness.

Additionally, there is testing for the building. This is very important and details about testing buildings can be accessed here.