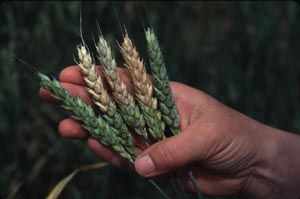 This is no surprise to the organic farmers, as they know they are farming in a manner that creates a healthier ecosystem. No one issue becomes overwhelming in a healthy environment. They don't use fungicides, as it wipes out good guys, and bad guys both, which leaves a big space for any of the fungi that were not killed to become superfungi and take over. However, the conventional farmers are baffled when plagues of fungal disease hit, and the organic farmers don't seem to be bothered by it in any significant way. They just shake their heads in disbelief. This fact does not fit in their reality.

A Carleton University professor named David Miller said, “I don’t know how, nor does anyone else in the world know how, to effectively produce small grains in risk areas in risk years without fungicides. That’s a fact.” This man should have checked out the 2016 Saskatchewan Fusarium head blight fiasco on wheat, and he might have learned something.

In 2016 when a Fusarium head blight caused conventional wheat farmers in Saskatchewan Canada to loose crops from the fungus, they could not understand how the organic farmers who used no fungicides were breezing by, and selling their wheat crops like usual. According to Miller's statment, the organic farmers in the middle of this blight epidemic should have had their crops destroyed the same as the conventional farmers in the area, but they didn't.

Research studies from Europe show organic agricultural systems have lower levels of fusarium than conventional cereal crops. There is an eye opening two year German study comparing organic, and conventional wheat, that looks at the differenence in mycotoxins produced between the two types of growing systems.

The study was undertaken from 1999-2001 to research mycotoxin development on three different varieties of wheat when they were farmed conventionally with fungicides or farmed organically. They made sure the soil quality and weather conditions were comparable in the two production systems. The batches of wheat were analysed for molds, and for the myctooxins zearalenone (ZEN) and deoxynivalenol (DON).  They also conducted feeding trials of the wheat with pigs to see if it affected their performance. They looked at their clinical condition and lab markers. Residues of ZEN, α-, and β-zearalenol (ZEL), and of DON were determined in bile, liver and muscle after slaughtering.

The results were interesting and expected. The conventionally cultivated wheat had more Fusarium mold, and contained more ZEN and DON mycotoxins than that produced organically. The pigs fed organic wheat had higher daily weight gain, but otherwise their performance was similar with the pigs fed the conventional wheat. Bile samples had the highest residue of  mycotoixns tested for in the animals. Bile samples of organically fed pigs contained lower concentrations of total-ZEN than those of conventionally fed pigs. (Yes, if you ate the conventionally grown pig here, you would be ingesting higher levels of mycotoxins in their meat than if you ate the organic pig.)