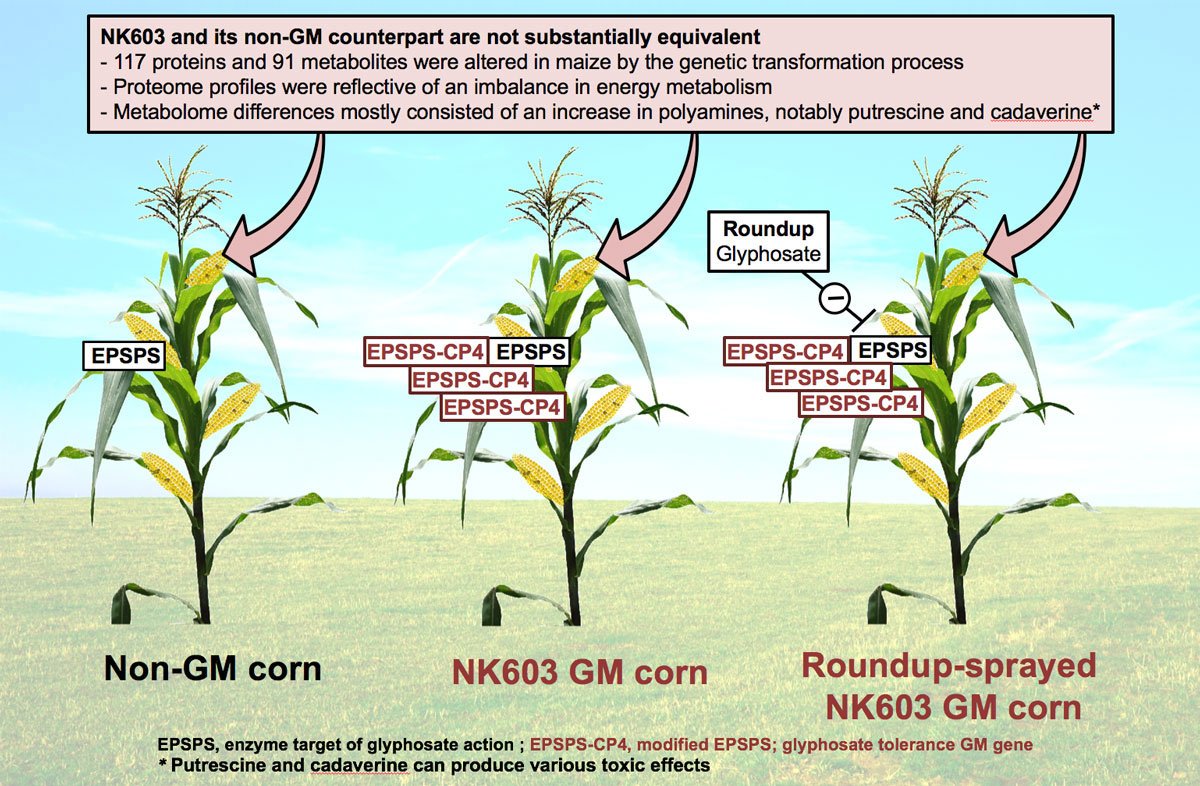 This is a review of the first long term research ever shared with the public on genetically engineered food. Although it is from some years back, it is still relevant today. This research was maligned by companies selling genetically engineered foods and glyphosate products. They kept many people from paying attention to this amazing, and well completed study. I am putting the article I wrote up as I wrote it in 2012. In 2012 these researchers were shunned by most of the planet. Today, people are finally realizing they should have listened to them sooner.

I took the copy of "Long term toxicity of a Roundup® herbicide and a Roundup®-tolerant genetically modified maize" to bed with me last night for some late night reading. It got me so wound up that I almost got out of bed to write this. However, I pulled in the reins and waited until today. If you want to read the original research, and I suggest you do, click here for the link at the bottom of their page. (they have great photos here is why I send you here first). 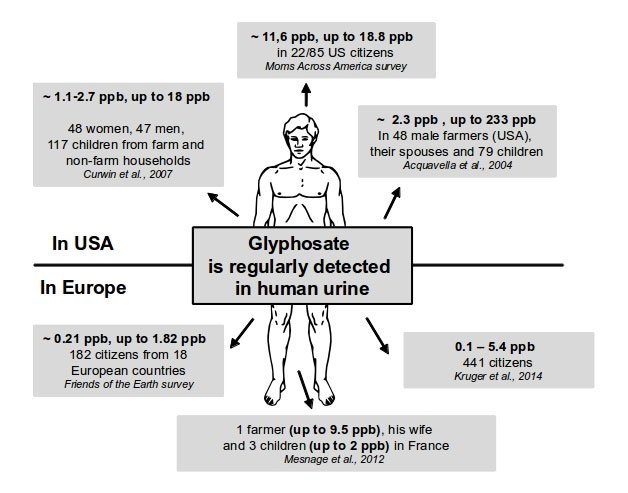 This is such great research for the following reasons

The type of GE maize researched was MON-00603-6, also known as NK603. This is a Roundup®-tolerant variety of corn owned by Monsanto. They compared it with a control group that was fed the nearest isogenic, non-transgenic corn. (So basically they compared Monsantos genetically engineered corn to a non-genetically altered corn that has similar dna structure.) Remember,  Monsanto claims their corn is theoretically genetically identical to this isogenic corn and they claim they should not have to study long term effects of their GE corn for this reason. Thank goodness, these researchers did not agree with Monsanto.

How The Corn Was Grown

They studied both the NK603 grown in a field by itself with no Roundup® applied as well as the NK603 which had Roundup® applied to it. They were careful to grow the "Normal corn", the NK603 and the NK603 with Roundup applied in similar fields and conditions. They also studied the effect of Roundup itself.

There were 200 rats. 100 males and 100 females. Each were broken up in to ten different groups, each with ten rats.

The rats were fed balanced diets that had either 11%, 22% or 33% of GE maize, cultivated either with or without Roundup® or 33% of the non-transgenic control line. They also gave three groups of rats the control diet (normal maize) with the addition of Roundup® in their drinking water. One of the Roundup® water groups had 1.1 x 10(-8%) an amount that is a level found regularly in some tap waters (according to them). The second Roundup® water group had .09% which is half of the US MRL(maximum residue limit) of glyphosate in some GE feeds and .5% which is half of the minimal agricultural working dilution.

What Body Samples Were Examined

Blood samples looking at hormones, minerals, blood sugar, indicators of various organ diseases, and inflammatory conditions. They were very thorough.  The blood samples were taken often enough to get a good picture of the animals health over the two year period. They also took urine samples at various time. At the end of the rats lives they took weights and  samples of most of their organs.  It was very thorough!

The idea was to follow these rats throughout their entire life-span and examine their organs at the end of  two years. Some animals became so sick they had to sacrifice them during the research and examine them at that time. This was done according to ethical rules. At the end of the two year study, any animals who had not died due to the research induced pathologies or due to old age were sacrificed. They then collected most of their organs  for weight, tumors and microscopy examination.

Remember as you read this that this was a two year experiment and most lab rats live about two years. So this was an experiment following these animals through what a normal life-span would be for them.

They have a great summary table (Table 2) that you should take a look at. It gives you a quick comparison of the most frequent health effects caused by the GE corn and GE corn with Roundup® and Roundup® in water. The interesting thing that you notice right off is that indeed the GE corn and GE corn/Roundup® and Roundup® water groups always have more health problems than the controls.

The largest palpable growths were found to be non-regressive tumors. Tumors were found to increase in size and number over the course of the experiment. The tumors were usually 2-3 times more likely in the treated groups than controls. This was in both females and males.

In females the largest tumors were in total 5 times more frequent than in males after the 2 year period. 93% of them were mammary (breast) tumors. (Hmmm, anyone thinking about the increase of breast cancer in human females?) At the end of the two years 50-80% of the treated female animals had developed tumors while only 30% of the controls were affected. The Roundup® treatment groups showed the greatest rates of tumor incidence with 80% of the animals affected. These mammary tumors are generally known to be mostly estrogen-dependent.   (Roundup® has been shown to disrupt aromatase which synthesizes estrogens as well as interfere with estrogen and androgen receptors in cells.)

The big palpable tumors in the males (in their kidneys and skin mostly) were by the end of the two years on average seen twice as often as the controls.

The second most affected organ in the females was the pituitary gland. They were affected 2 times more than the controls for most treatments. (The pituitary gland is very important as it regulates many hormonal systems of the body.)

The most affected organs in the male rats were the liver, digestive tract and kidneys. Liver congestion and both visible and microscopic areas of dead tissue were 2.5-5.5 times more frequent in all the treatment groups than the control groups.

In females the androgen/estrogen balance in serum was modified by the GM maize and Roundup® treatments. (Again they have a great table you should veiw.)  In the males at the highest Roundup® treatment they had almost double the usual amount of estrogen. Any of you guys eating GE food that are using Cialis or some other errectile enhancer? Does this finally make you think of throwing your GE food in the trash? (Now I am thinking about all the farmers reporting poor fertility in their animals eating GE food. Plus, have you noticed the huge increase in fertility clinics. Infertility in humans is skyrocketing.)

The interesting thing to note is that the groups with smaller amounts of GE corn, GE corn/Roundup® and Roundup® water  caused as much damage as the groups who consumed or drank larger amounts. When you see this table, you realize people who are ingesting as much as 11% of their diet as GE food could be causing themselves as much organ damage and growing as many tumors as those  eating 33% of their diet as GE food. How scarey is that? People who think it is okay to eat a little bit of GE food better rethink that idea.The fact that the Roundup® water itself caused damage, shows the Roundup® is an issue.

They pointed out some things in their discussion that I thought were noteworthy.

Another thing regarding caffeic, and ferulic acid is they have been shown to promote detoxification of embryonic kidney cells after Roundup® contamination in prior research by Ganier in 2011. The decreased amount of them in the GE diet could account partially or wholly for the kidney damage.

I take my hat off to the researchers Gilles Eric Seralini, Emile Calir, Robin Mesnage, Steeve Gress, Nicolas Defarge, Manuela Malatesta, Didier Hnnequin, Joel Spiroux de Vendomois. The planet is indebted to you and those like you who are spending countless hours working for the better of planetary life. You and others like you are in my prayers. You are going to need all the support you can get as you just took on a monster. Let us all support you in any way we can.

This paper has provided adequate evidence to make everyone concerned about the use of glyphosate on the world food supply. If you don't already eat organic food, I hope reading this has steered you in that direction. Please send this article to your friends.